After The Storm: How Political Attacks on Renewables Elevates Attention Paid to Climate Change

After The Storm: How Political Attacks on Renewables Elevates Attention Paid to Climate Change

This time last year, Australia was getting over a media storm about renewables, energy policy and climate change. The media storm was caused by a physical storm: a mid-latitude cyclone that hit South Australia on September 29 and set in train a series of events that is still playing itself out.

In one sense, the Finkel Review was a response to the government’s concerns about “energy security”. But it also managed to successfully respond to the way energy policy had become a political plaything, as exemplified by the attacks on South Australia.

New research on the media coverage that framed the energy debate that has ensued over the past year reveals some interesting turning points in how Australia’s media report on climate change.

While extreme weather events are the best time to communicate climate change – the additional energy humans are adding to the climate is on full display – the South Australian event was used to attack renewables rather than the carbonisation of the atmosphere. Federal MPs hijacked people’s need to understand the reason for the blackout “by simply swapping climate change with renewables”.

However, the research shows that, ironically, MPs who invited us to “look over here” at the recalcitrant renewables – and not at climate-change-fuelled super-storms – managed to make climate change reappear.

The study searched for all Australian newspaper articles that mentioned either a storm or a cyclone in relation to South Australia that had been published in the ten days either side of the event. This returned 591 articles. Most of the relevant articles were published after the storm, with warnings of the cyclone beforehand.

Some of the standout findings include:

There was also a strong correlation between the positive and negative discussion of climate change and the ownership of newspapers.

The starkest contrast was between the two largest Australian newspaper groups. Of all the sampled articles that mentioned climate change, News Corp was the only group to has a negative stance on climate change (at 50% of articles), but still with 38% positive. Fairfax was 90% positive and 10% neutral about climate change. 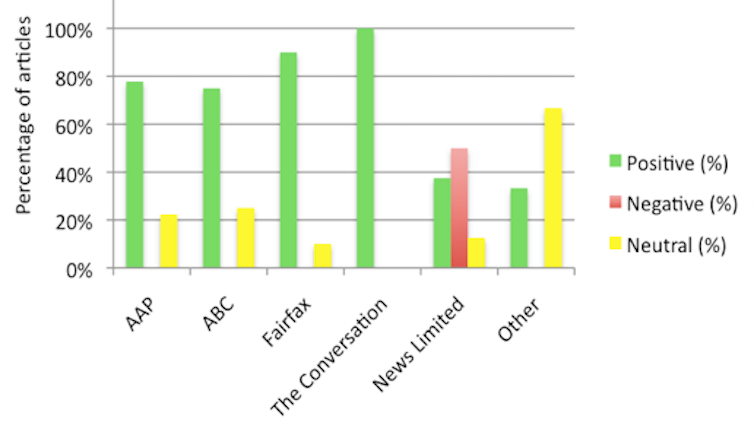 Given that more than half of all articles discussed power outages, the cyclone in a sense competed with renewables as a news item. Both have a bearing on power supply and distribution. But, ironically, it was renewables that put climate change on the news agenda – not the cyclone.

Of the articles discussing renewables, 67% were positive about renewables with only 33% “negative” and blaming them for the power outages.

In this way, the negative frame that politicians put on renewable energy may have sparked debate that was used to highlight the positives of renewable energy and what’s driving it: reduced emissions.

But perhaps the most interesting finding is the backlash by news media against MPs’ attempts to politicise renewables.

19.63% of all articles in the sample had called out (mainly federal) MPs for politicising the issue and using South Australians’ misfortune as a political opportunity. This in turn was related to the fact that, of all the articles discussing renewables, 67% were positive about renewables with only 33% supporting MPs’ attempts to blame them for the power outages.

In this way, while many MPs had put renewables on the agenda by denigrating them, most journalists were eager to cover the positive side of renewables.

Nevertheless, the way MPs sought to dominate the news agenda over the storm did take away from discussion of climate science and the causes of the cyclone. Less than 4% of articles referred to extreme weather intensifying as a trend.

This is problematic. It means that, with a few exceptions, Australia’s climate scientists are not able to engage with the public in key periods after extreme weather events.

When MPs, with co-ordinated media campaigns, enjoy monopoly holdings in the attention economy of news cycles, science communication and the stories of climate that could be told are often relegated to other media.