Still, some plots teem with biodiversity: coffee grows under the shade of banana trees, while nearby there are African plum trees (known locally as safou), cola, oranges and timber trees like mahogany. To the untrained eye this might appear to be natural forest, but is in fact the fruit of agroforestry – the growing of trees with crops. 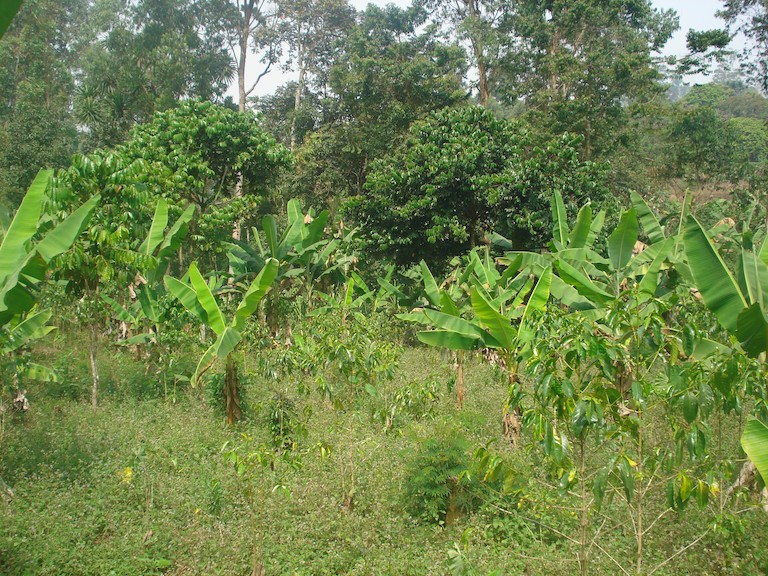 Typical agroforest in the North West Region of Cameroon with plantains and indigenous fruits and timber trees. Photo by Ebenezar Asaah

“It’s mimicking what you would find in a typical forest, because you find at least three distinguished structures of diverse species which are all growing in an optimum manner,” said agroforestry and food security expert Ebenezar Asaah, a Cameroonian scientist who managed the Agricultural and Tree Products Program for the western highlands of Cameroon between 2007 and 2009. From a rural farmer’s perspective, he explains, the strength of agroforestry is that different plants supply different products at different times of the year, providing an extra source of income when the farmers’ expenses are high, plus food and medicine, among other goods.

Although it is also found in the U.S., Europe, and Australia, agroforestry is predominantly practiced in the tropics and sub-tropics. Here, conventional high-input modern agriculture often fails to deliver food security and sustainability, and people are often in need of income generation from products not controlled by international trade. But this agricultural system benefits more than food security in the tropics: it also helps to curb deforestation, preserve cultural diversity and fight climate change.

The term agroforestry was coined in the 1970s, and its most recognizable examples include shade-grown coffee and chocolate. Yet awareness and understanding of it has remained low. “There are a lot of definitions out there in the literature,” says Roger Leakey, a leading expert and author. “I personally define it as a way to create an agro-ecological succession by planting trees. This means that by planting trees you start to create the microclimate that will allow all sorts of wild organisms to inhabit the soil, and the above-ground habitats, and so to start to create a more functional ecosystem within the farm,” he said. 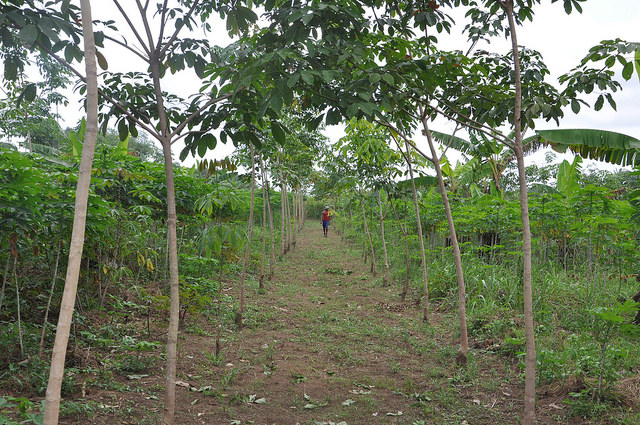 Leakey points out that not only does agroforestry improve the productivity of farmland and alleviate poverty, it also protects the environment. Just as in a natural ecosystem, he adds, biological diversity increases as the agro-ecosystem matures. How much it will increase depends on how many tree species are planted.

As shown by a growing number of studies, agroforestry systems maintain higher levels of biodiversity than other agricultural systems. This is because agroforests provide habitat suitable for forest-dependent species while stemming deforestation.

“By applying agroforestry we can rehabilitate the 35 percent of global agricultural land that is degraded, so that farmers would not have any need to deforest; this would also reduce pressures on natural forests and woodlands,” Leakey says. Still, he notes, agroforests show a level of biodiversity a little bit lower than natural forests.

“That is always going to be a double-edged sword,” says Ravi Prabhu, deputy director general of the International Council for Research in Agroforestry (ICRAF), which is a global leader in agroforestry research and development based in Nairobi, Kenya.

Prabhu says agroforestry generally has a beneficial impact on biodiversity, except in the cases where primary forests or species-rich grasslands are converted to agroforests, where resulting species diversity is likely to be lower.

“If conversion in such cases cannot be avoided – it should! – then it would still be better to convert to a multi-species agroforestry system rather than a monoculture plantation of oil palm, as is happening frequently,” he said. In the vast majority of cases, then, agroforestry is a way of restoring agricultural lands and makes an important contribution to climate change mitigation and adaptation, even though the latter is not yet systematically accounted for in either global carbon budgets or national carbon accounting. 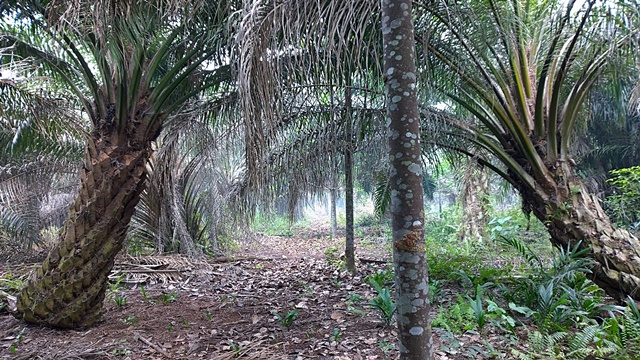 Oil palm grown with ‘jelutung’, a latex-producing tree, and coconut.

“What we do know is that agroforestry covers over 1 billion hectares of land, roughly equal to the size of Canada. This amount of land planted to agroforestry has been estimated in a recent paper published by my colleagues Zomer and others in Nature to sequester or remove 0.73 gigatons of CO2 equivalent from the atmosphere each year for the past 10 years” by storing carbon in perennial vegetation and in soil organic matter, Prabhu says.

“There is substantial variation in both the annual sequestration rate and lifetime carbon storage between and within the various practices,” says Eric Toensmeier, agroforestry expert and author. “Agroforestry systems tend to be on the high end – adding trees to annual cropping, or pastures, increases annual and lifetime sequestration substantially.”

Tropical home gardens, a type of multistrata agroforestry, are considered to have the highest biodiversity of any human-created ecosystem, adds Toensmeier, stressing the fact that agroforests can also serve as wildlife corridors between intact habitat fragments, and pruning of trees for firewood rather than cutting them down reduces deforestation in regions where wood is the primary cooking fuel. Leakey notes a study in his book, Living with the Trees of Life, that shows home gardens in Indonesia contain 60 to 70 percent of the animal species found in the surrounding rainforest.

Fertile soil is crucial to meet the world’s ever-growing food demand. The human population is expected to grow to almost 10 billion by 2050, and according to the UN Food and Agriculture Organization (FAO), agroforestry is one of the agricultural systems we should invest in, as it is able to enhance natural resources while also increasing productivity.

For instance, leguminous trees pull nitrogen, a nutrient critical for plant growth, out of the air and release it into the ground. These nitrogen-fixing trees are often used in agroforestry systems and in organic farming as well. A 2014 study found that incorporating trees like acacia or Faidherbia albida increases the productivity of degraded land, resulting in an increase in crop yield of between 89 and 318 percent. It also found agroforestry improves soil structure and increases drainage, especially during wet periods. For instance, authors found that in eastern Zambia and Zimbabwe, steady-state infiltration rates were 42 to 600 percent higher when maize was rotated with leguminous trees compared to monocultures of maize. Time to water runoff was also longer by 40 to 133 percent, and drainage was improved by 88 to 900 percent. 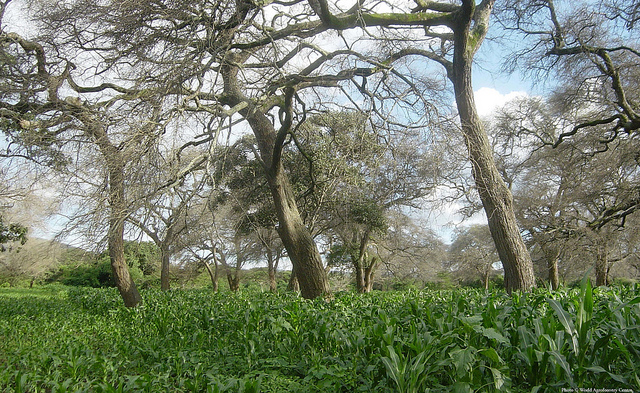 In hot, dry areas such as Africa’s Sahel region, farmers increasingly practice agroforestry because crops grow better under trees than they do in the open, because shade reduces soil surface temperatures. Also, tree roots work as hydraulic pumps, bringing water up from as deep as 20 meters below the soil’s surface, making it available for crops even when it’s not raining.

To this day indigenous people are the major practitioners and innovators of agroforestry; they have been practicing it for millennia, and have passed their knowledge from generation to generation, refining and adapting their systems through practice and observation.

Antonella Cordone, senior technical specialist of indigenous peoples and tribal issues at the International Fund for Agricultural Development (IFAD), believes one key aspect the world can learn from them is how to engage a sustainable and integrated approach to managing ecosystems in a multifunctional way.

Cordone stresses the fact that when entering communities, the approach taken has to be based on an appreciative inquiry, building on the skills and the knowledge of the people and avoiding technocratic approaches whereby solutions are proposed from outside. “Specialists in modern agroforestry can help local communities to the extent they are able to listen to indigenous peoples and local communities and recognize that indigenous peoples’ knowledge is not inferior to formal science and technology,” she told Mongabay via email.

Leakey agrees, and points out that when he was ICRAF’s director of research they developed a highly successful method called “participatory domestication”, a bottom-up approach that consists of engaging with local farmers from day one and assisting them to grow the species that they feel are the most beneficial to them. 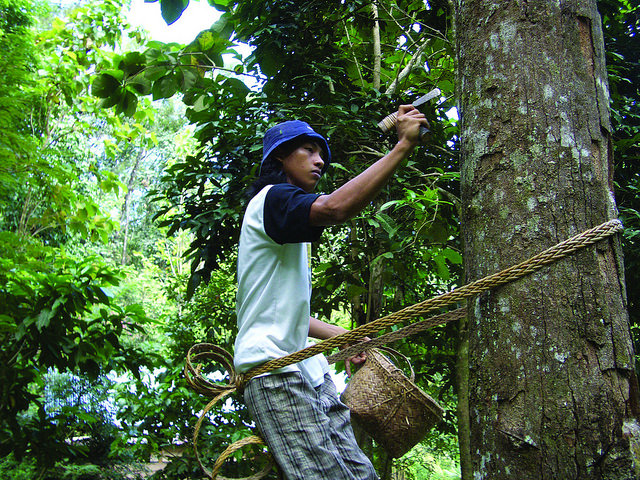 Syed Ajijur Rahman, consultant at the Center for International Forestry Research (CIFOR) in Bogor, Indonesia, told Mongabay via email that “the familiarity with their land, leading to careful selection of sites for tree planting, together with good tree husbandry (like decaying trees being individually replaced whenever needed), results in high levels of tree establishment and growth rates.”

Rahman also believes agroforestry can revive and save indigenous people’s traditions, as it allows them to harvest plants that have high cultural significance or are used in religious and social ceremonies.

Agroforestry systems can be developed in an almost infinite combination of species and temporal and spatial arrangements, depending on the needs of the farmers and the types of production systems, explains agroforestry researcher Robert O’Hagan.

“Finding the right system for any given situation can be difficult,” he says, stressing the fact that listening to the needs of local communities is pivotal, and best practice guidelines will not work in all situations but should be adapted case by case.

“Adequate training and extension services to improve the management skills of agroforestry farmers are often a key to success, as tree management and maximizing the beneficial interactions between trees and crops can often require more skills [than] open field agriculture,” O’Hagan says. He adds that credit availability and incentive schemes can be essential to overcoming the sometimes high initial investment costs and low returns during the establishment phase of agroforestry systems.

Leakey agrees that once farmers start to advance into the cash economy, small-scale loans do become appropriate; but prior to that, the main need is training and capacity building. “One of the advantages of agroforestry is that it requires virtually no investment by the farmer, other than some time and effort,” he says. This is why it is so often appropriate for subsistence farmers. 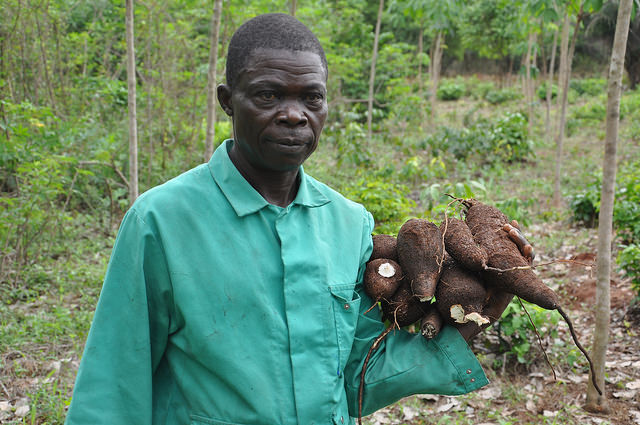 A farmer with cassava harvested from his rubber-based agroforest in Nigeria.

“I like to use the term ‘Back to the Future’ to describe agroforestry, because until the mid-19th century it was the dominant form of agriculture in the world,” says ICRAF’s Prabhu. Mechanization made its debut in the American grasslands, he says, before reaching the developing world, but methods developed in the U.S. Midwest do not always fit the tropics.

“Most people in industrialized countries have been brainwashed into thinking that if there’s a tree in the middle of a field it is better to cut it down, so you can get your tractor to go past it,” Leakey says.

He argues that this is one reason why the general public and policymakers find it difficult to understand agroforestry. “We’re not ‘greenie eco-warriors’. We’re just being very pragmatic, logical, and sensible about developing effective, productive, sustainable and multifunctional agriculture.”