Are you ready to create and manage a green travel policy?

Methane Rules Are Good for the Energy Industry

A mere 15 Grauer’s gorillas (Gorilla beringei graueri) were believed to live inside Africa’s Maiko National Park. But biologist Damien Caillaud suspected otherwise. He felt sure the preserve’s nearly-impassable jungle could shelter more of the Critically Endangered great apes — hidden in deep gorges in the shadow of precipitous peaks.

No one knew for sure. Maiko, which sprawls across some 4,000 square miles in the eastern part of the Democratic Republic of Congo (DRC), has remained unexplored since the Congolese civil war broke out in 1994. Though the conflict officially ended in 2003, armed militias continue to make this region — and this nation — among the most dangerous places to monitor and conserve wildlife.

The survey teams made a shocking discovery: they found that a mere 3,800 of the apes remained, holding on only in the most remote regions. In just two decades, 77 percent of the species had disappeared. 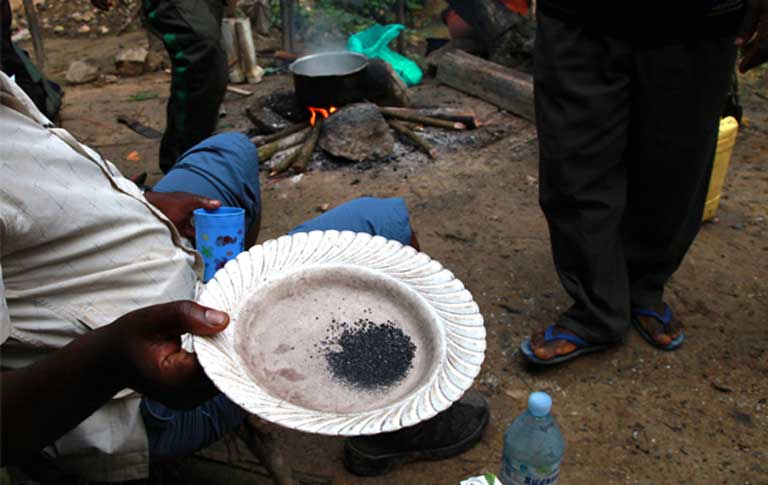 Most of them had been hunted and eaten as bushmeat, some by refugees from the Congolese civil war. But the majority were poached by militia groups and illegal miners who have invaded the forests in search of valuable “conflict minerals” such as coltan and tin ore — used in cell phones, laptops and other electronics.

With Grauer’s gorillas hovering on the precipice of extinction, every animal counts toward the species survival, and it’s critical for researchers to locate every viable population so they can then be protected by ranger patrols.

So despite the risk, Caillaud — a University of California, Davis, professor who directs research for the Dian Fossey Gorilla Fund‘s DRC Grauer’s gorilla program — planned a two-week expedition to survey 40 square miles in the southernmost part of the park, collaborating with the only people who could make they survey happen: Urbain Ngobobo, the Fund’s Congo director, and Boji Dieudonné, the park’s director.

The three targeted a rugged region, a three-day walk from the nearest road or village, that was further isolated by the Oso River — places where the great apes, if they were there at all, could likely stay out of the crosshairs. 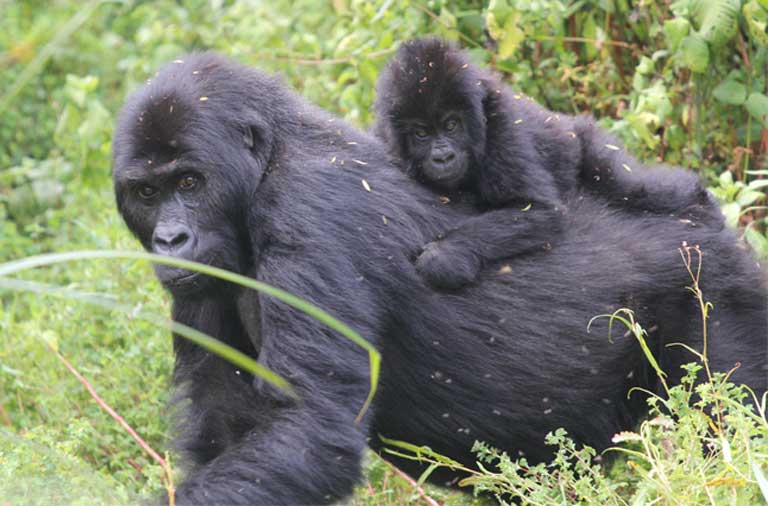 Ngobobo headed a 15-person expedition that included one of the Fund’s most experienced gorilla trackers, Escobar Binyinyi, plus seven other staff, as well as armed rangers from the Congolese Institute for the Conservation of Nature, the agency that manages DRC’s national parks.

There were few trails. They used machetes to slash their way through thick vegetation, up and down slopes so steep that they often had to clamber on all fours. But the ultra-tough terrain gave them hope: it could deter hunters.

What they found far surpassed their expectations: the team counted 30 Grauer’s, never before encountered by scientists, in a mere one percent of the park — double what was thought to live in the entire preserve. The hope is that there are more tucked in other largely inaccessible regions.

“It’s obviously great news that there is at least one viable population living in this southern end of the park — but it poses challenges,” says Caillaud. “We need to find ways to protect these gorillas.” And that needs to be done quickly. 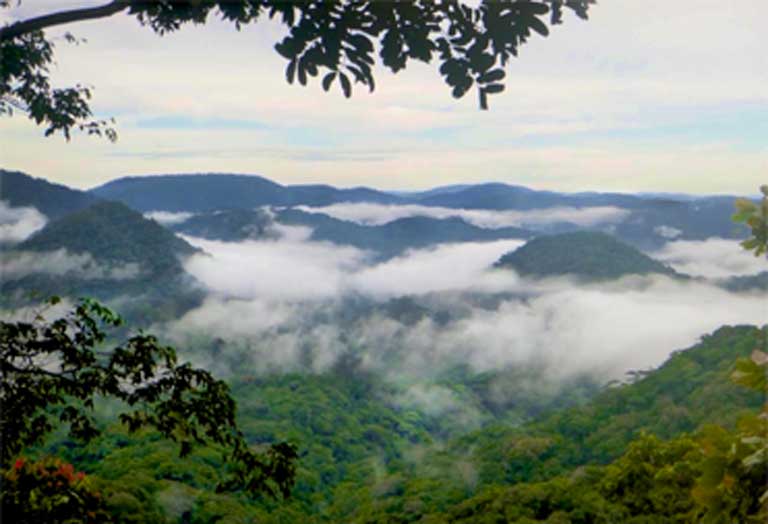 Although the Democratic Republic of Congo has the world’s second lowest GDP, it is considered the richest nation in natural resources, with mineral deposits worth at least $24 trillion. It is also a country endowed with extraordinary biodiversity. Photo courtesy Dian Fossey Gorilla Fund International

The civil war, which killed some 5.4 million people, left behind at least 70 armed groups that fund their activities by illegally mining the region’s rich, abundant mineral resources, valued at $24 trillion. Chief among these are gold and conflict minerals: tin, tantalum, coltan and tungsten.

With no other source of food in the jungle, the miners and militias live on bushmeat. And the Grauer’s are a popular target: they’re the world’s largest primates, with an average-sized male weighing about 400 pounds, which supplies a substantial amount of meat.

Illegal mining for conflict minerals is a major escalating crisis, driving Grauer’s gorillas and other wildlife quickly towards extinction, says Tara Stoinski, the Fossey Fund’s president and chief scientific officer. “It is also responsible for immense human suffering in Congo,” she adds, noting that the militias terrorize local communities, making this both a human rights issue and a conservation issue. 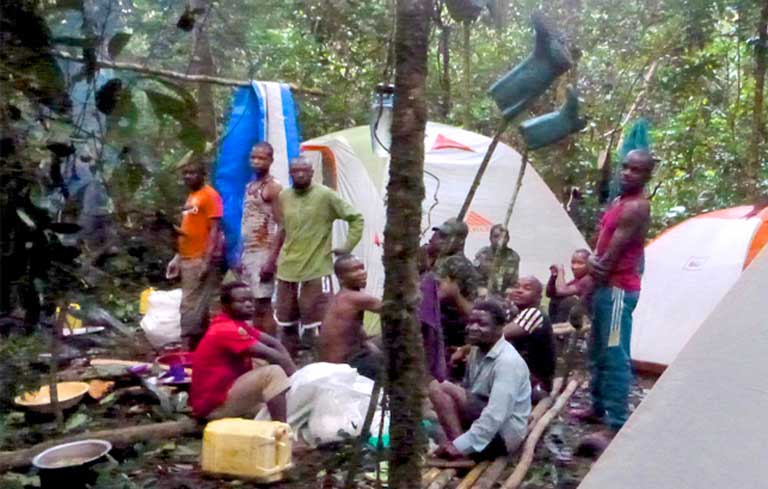 Meanwhile, a presidential memorandum drafted by President Donald Trump last February began a process that could make the area significantly more dangerous for wildlife and people. The leaked executive order proposed abolishing a requirement that US companies disclose whether their products include conflict minerals sourced from the DRC or neighboring countries.

Then in September, the Republican-dominated US House of Representatives moved on the issue. They voted to officially remove oversight by defunding the “Conflict Mineral Rule,” legislation generated in 2010 with bipartisan Congressional support as part of the Securities and Exchange Commission’s Dodd Frank Act. It required companies to report where the minerals they are using in the manufacture of cell phones and computers came from.

Caillaud says that transparency, like that provided by the US Mineral Rule, has been one of the best tools for protecting the Critically Endangered gorillas and other DRC wildlife. “This bill looks like deregulation — but it’s the opposite: it makes it impossible for consumers to know where products come from — and who was harmed along the way. This bill obfuscates damaging business practices,” he says.

The legislation defunding the Mineral Rule is now headed to the Senate and is expected to have strong GOP support but meet resistance from Democrats. 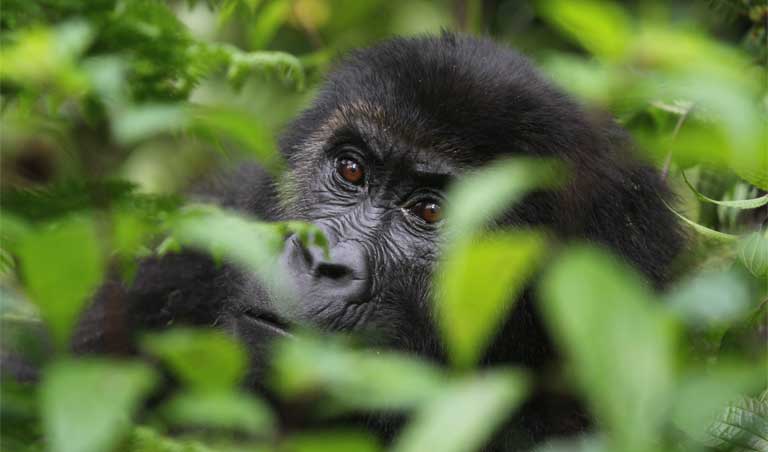 A survey of just one percent of DRC’s Maiko National Park revealed the presence of 30 previously undiscovered Grauer’s gorillas — when researchers thought that there might be only 15 in the entire park. Photo courtesy Dian Fossey Gorilla Fund International

A call to action

The discovery of the 30 gorillas in Maiko, while celebrated by conservationists, doesn’t in itself change things much for Gorilla beringei graueri and its chances for survival. But the discovery shows just how little is known by scientists about where the remaining healthy populations are.

Now researchers hope to launch a series of expeditions to identify and map the location of hidden enclaves, and then figure out how to protect them.

Still, there are obstacles: each two-week survey costs around $5,000, says Caillaud, and the funding resources flowing into the region are slim.

They’ll need to mobilize quickly. “The rate of decline is so rapid. We’re losing about five percent of remaining Grauer’s a year — that’s unsustainable,” says Stoinski. The only way to stop the carnage is “boots on the ground: rangers who are well-equipped, well-paid, and well-outfitted who know where critical populations are.” And of course, that will require even more money, especially for ranger teams stationed in remote Maiko National Park. 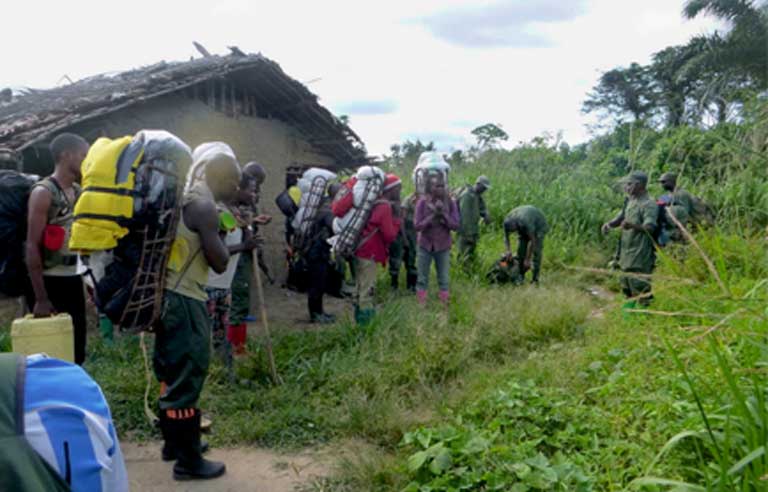 The Fossey team moves through a small village, under the protection of armed rangers on the lookout for members of any of the country’s 70 active militia groups. Photo courtesy Dian Fossey Gorilla Fund International 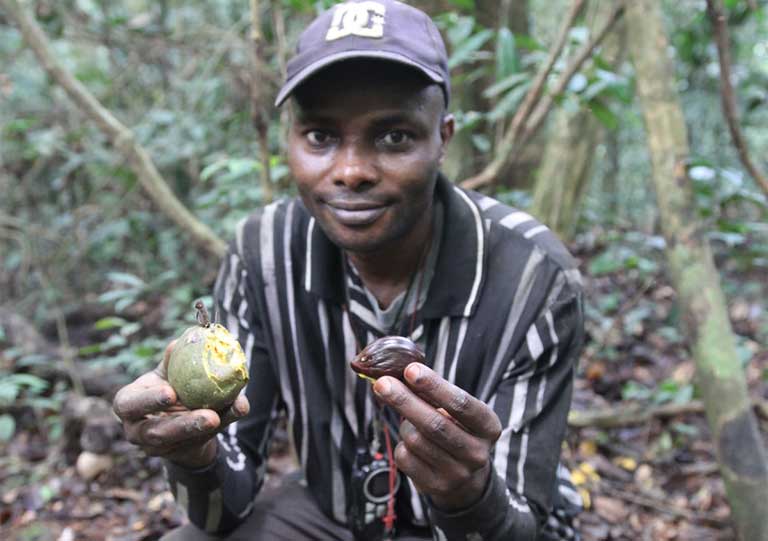 But the investment is worth it: this area is among the world’s most biodiverse regions, still populated by okapis (Okapia johnstoni), eastern chimpanzees (Pan troglodytes schweinfurthii), African forest elephants (Loxodonta cyclotis) and other increasingly rare animals. But the gorillas remain the icons here, and by protecting them, the entire ecosystem can likely be conserved. “But it’s so challenging to be there,” says Stoinski, “which is why it’s so critical to be there.”

Surveying and patrolling the DRC’s protected areas requires military-level vigilance and equipment. That’s why the most recent expedition to find the Maiko gorillas was heavy on both science and security. The expedition was planned for an area thought to be relatively free of militias. On the ground, the team was on constant alert, not only seeking evidence of gorillas, but on the lookout for signs of intruders: spent shell cartridges, smoke from campfires, poachers’ camps and illegal mining operations.

This is extremely dangerous work, says Stoinski. “These men are literally putting their lives on the line to protect wildlife.… There have been at least six park guards killed in the DRC within the last few months.” 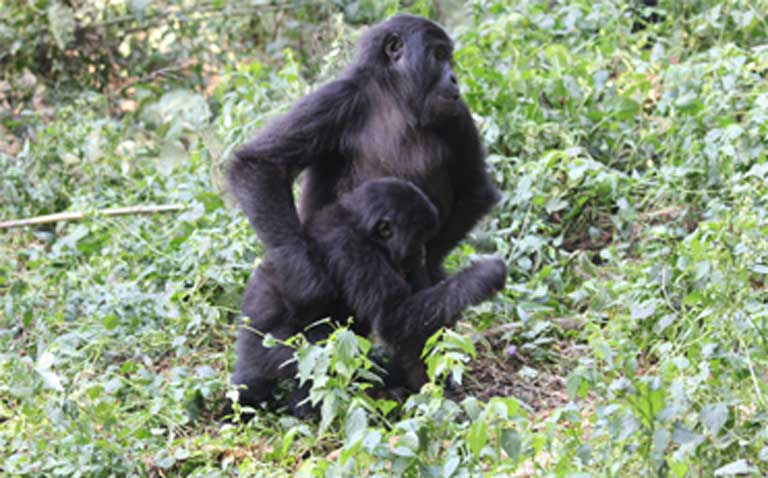 In 2016, researchers discovered that 77 percent of all remaining Grauer’s gorillas had disappeared, and the apes were listed as Critically Endangered on the IUCN Red List of Threatened Species. Scientists are moving fast in order to protect the newly discovered Maiko National Park gorillas. Photo courtesy Dian Fossey Gorilla Fund International

In conflict zones, NGOs often leave when dangers multiply, and as a result, wildlife is often decimated — one key reason why her organization stays on.. “If people are not there doing conservation work, we are going to lose Grauer’s gorillas,” Stoinski says.

One fact is worth repeating: more than five million people have died in DRC conflicts over the last 20 years. “Amidst all this,” Stoinski concludes, “the people we’re working with still care about preserving their forest — preserving biodiversity. That’s what gives me hope and inspiration.”

Are you ready to create and manage a green travel policy?

As we enter 2020, an entirely new decade is opening up full of incredible opportunities to improve the climate...