As India’s Climate Changes, Farmers in The North Experiment with New Crops

As India’s Climate Changes, Farmers in The North Experiment with New Crops

On a recent weekday, Vamsi Komarala guides me up to the rooftop of the prestigious Indian Institute of Technology in New Delhi, where he teaches physics. Fields of solar panels adorn the buildings.

I swipe an index finger across one of the panels to see if weeks of monsoon rains have washed it clean. My finger comes back filthy with grit.

Vamsi tells me the panels are washed twice a week, then explains the grime: “That is because in New Delhi, we have a lot of dust.”

Dust is just one factor. The capital city and much of northern India are routinely shrouded in man-made pollutants. In fact, Delhi vies with Beijing for the dirtiest air in the world.

Air pollution is the leading risk factor for most deaths and disabilities in India, a country that’s home to 13 of 20 of the world’s most polluted cities.

The country’s dilemma is stark: To lift millions from poverty, it will require ever more energy. But most of India’s electricity is generated by coal-burning power plants. Millions of new cars choke the roads each year. Add to the mix the burning of garbage and crops, and it’s a toxic cocktail that makes India the third-largest contributor of greenhouse gas emissions in the world, after China and the United States.

Under pressure to cut these emissions — which contribute to global warming and climate change — India is turning to its greatest source of clean, renewable energy: sunshine.

It’s drenched in it 300 days of every year. Already, solar energy is changing the landscape across New Delhi, and the deserts of Rajasthan. But pollution is diminishing its power.

A new study has found that air pollution cuts the capacity of solar panels to generate power — and the smaller the particle, the more effective it is at blocking out the sun. Some of these very particles are dirtying the solar panels on the Indian Institute of Technology rooftop. 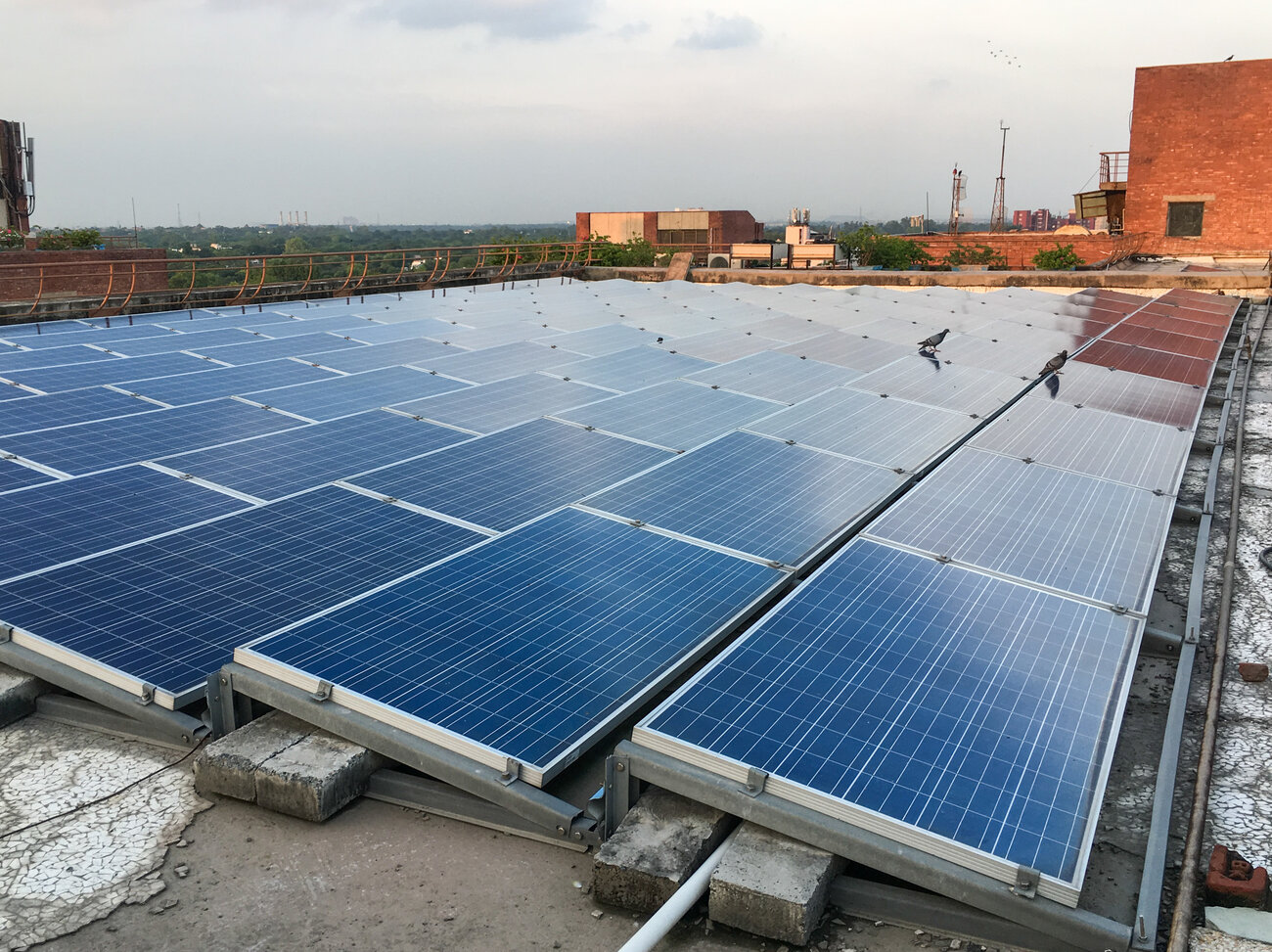 When solar panels are clean — like the ones on the rooftop of Delhi’s Habitat Center, a conference and office complex in the central part of the city — solar energy production typically doubles, according to a new study led by Duke University researchers.

Michael Bergin of Duke University’s civil and environmental engineering department, the study’s lead author, says tiny particulate pollution can either absorb the sun’s radiation or scatter the sunlight, diffusing the light that hits solar panels. He’s created a model to measure that loss — which is substantial.

“We came up with between 17 percent to 25 percent reductions in solar energy production in India and China,” he says, “and we believe that the effects might be a little higher since the model we use tends to under-predict the effects.”

Unaccounted for are the effects of things like burning trash, a widespread practice in India. As for deposits on solar panels, Bergin and his Indian team monitored accumulations at the Indian Institute of Technology in Gandhinagar, in the state of Gujarat — and arrived at eye-popping results.

Improving air quality would vastly improve the production of solar energy. It would, says Bergin, “have huge health benefits. So I think this is just another reason to try to clean the air.”

Hundreds of miles north of Delhi, in the state of Uttarakhand, the air is clean. And here, changing climate conditions can seem more like an opportunity to exploit than a looming threat to fear.

Along the hairpin turns of the Himalayas, brightly colored houses appear as though they’re painted on the sheer cliffs, and join the steppes as they slip into the Ganges. Roaring rivers are swollen by the summer monsoons. 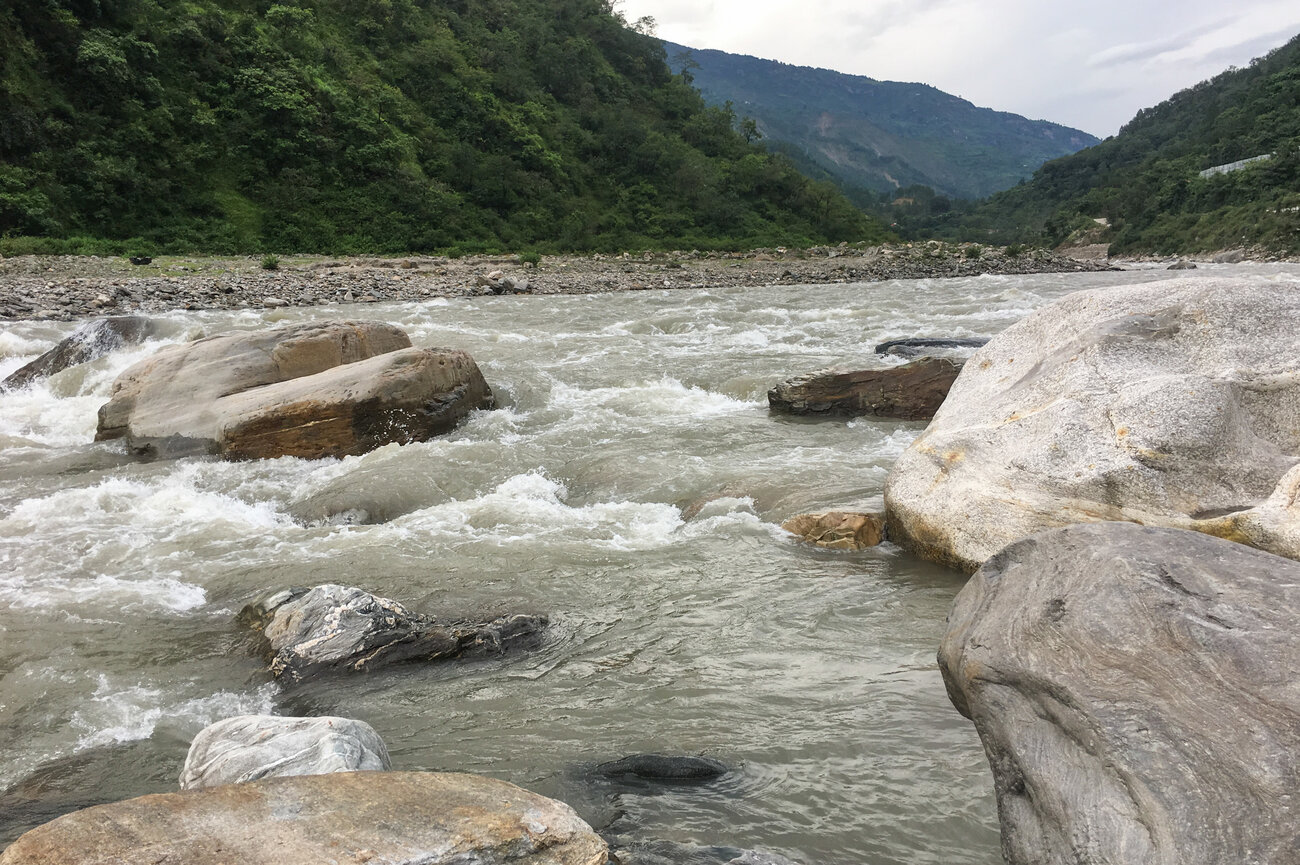 Uttarakhand, straddling the Himalayas, has an abundance of natural streams and rivers. The headwaters of the Ganges are in this northern state. But river water doesn’t feed agriculture — it’s too difficult to pipe the water up. Villages are rain and snow-fed.

But the rivers don’t feed mountain agriculture — it’s too difficult to pipe water up. The villages are rain- and snow-fed.

But the villagers report that less snow is actually falling, a decline they began to notice in the 1980s.

Suruchi Bhadwal leads an experiment designed to help farmers in high altitudes capitalize on the milder conditions brought about by a decrease in snowfall.

Her group, the New Delhi-based Energy and Resources Institute, studies the impact of climate change on agriculture in the region. We head to a village where farmers were persuaded to make the most of their less snow-filled winters by cultivating land that used to lie fallow during the cold months.

“So now, they benefit because they are taking a crop out of it,” says Bhadwal. “And it gives them more in their homes and more to sell. It was a total win-win for them.”

In the village of Huddu, its ancient terraces are indeed sprouting a new crop — organic potatoes. They’re being cultivated alongside traditional crops.

On a rocky terrace, women are planting grasses used for fodder. Watching them is Basanti Devi, perched crossed-legged on a boulder, her face weather-beaten. She recalls 35 years ago getting five feet of snow. Calculating how much snow there is nowadays, Basanti swipes an imaginary line just above her ankle — a matter of inches, she says. 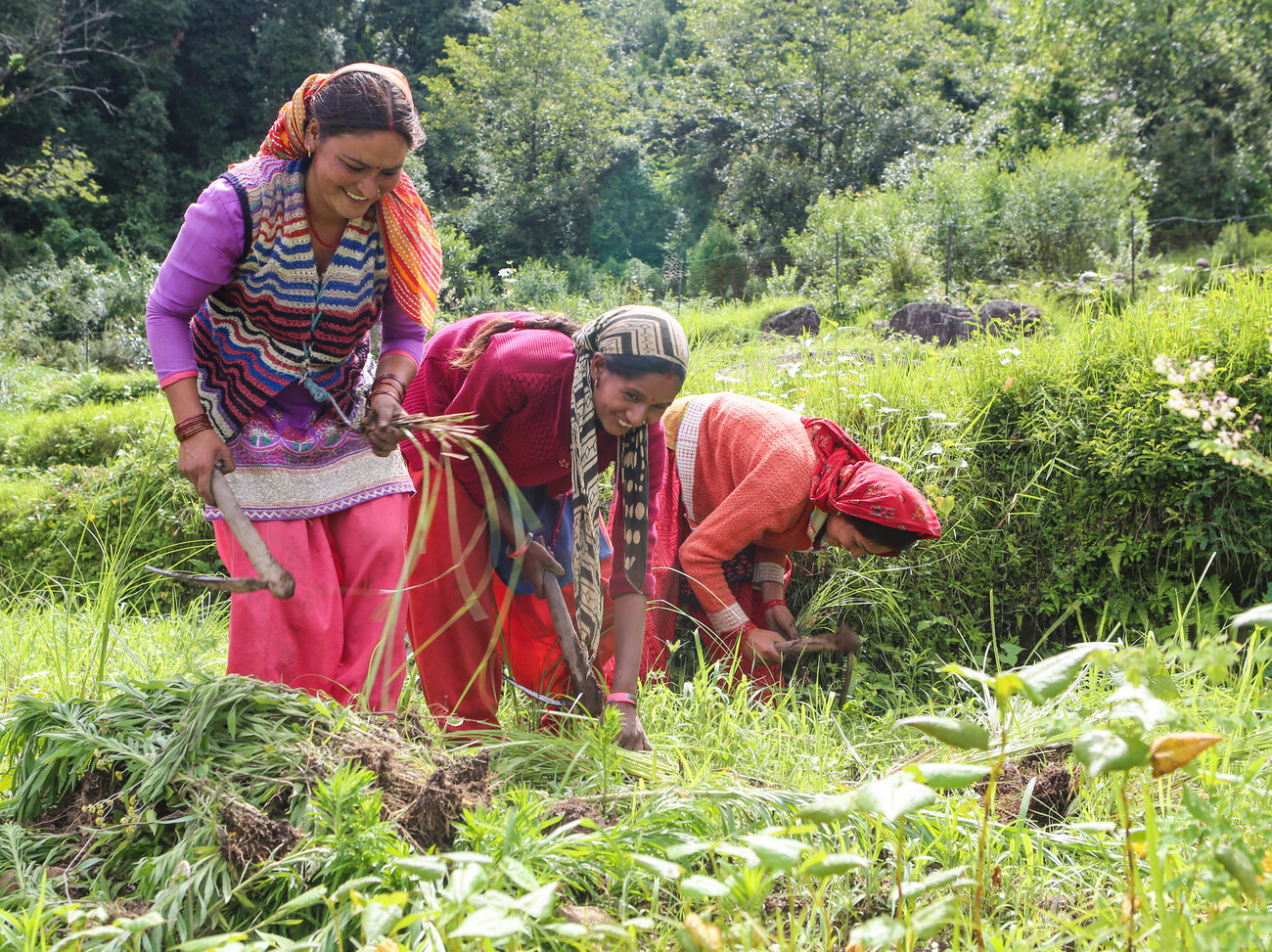 Women, who make up most of the field hands in the village of Huddu, plant grasses used for animal fodder. They report that the snowfall has decreased, a decline that villagers began noticing in the 1980s.

Anand Kumar Sharma, in charge of the western and central Himalayas for the India’s Meteorological Department, has doubts. Perception is one thing, he says, and “reality is something else.” People confuse climate variability — short-term, natural fluctuations such as El Nino — with the phenomenon of climate change, Sharma says.

Sharma used to be the chief meteorologist in Uttarakhand and notes that there are just two stations collecting data over the vast region that is filled with micro-climates. He says it’s not possible to know whether the reduced snowfall in one village is due to climate change.

An authoritative study released last year — whose authors include experts from India’s meteorological department and Earth Sciences Ministry — appears to identify phenomena considered consistent with climate charge. It found that 23 glaciers in Uttarakhand had sharply retreated between 1960 and 2000.

It also states that between 1951 and 2000, in northern parts of India, “There are significant rising trends of extreme rainfall trends,” which cause large-scale floods.

‘Earlier, that land wouldn’t give me much’

Adapting to their changing conditions, women are now harvesting the organic potatoes they planted in January. That’s when villagers took advantage of their lengthened growing season for the first time.

Surji Devi’s digging releases the scent of fresh earth into the air. At 60, she’s nimble, rapidly separating the potatoes into piles. She pulls out several that are spoiled and crinkles her face into a frown. 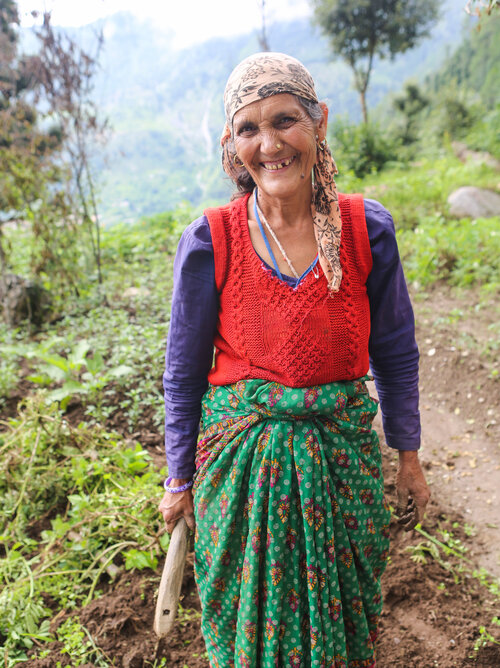 Surji Devi, 60, is a farmer in the village of Huddu in Uttarakhand.

Kailash Bhatt is a community organizer who helped mobilize 48 of the 100 families here to try their hand cultivating year-round. Is he happy with the yield?

“Actually, not so happy,” Bhatt says. “But this is the first time.”

Visiting agricultural experts tell the farmers that they grew the wrong varieties. Narayan Singh, a project director for TERI, explains their yield should be three times what they grew.

But with proper seeding, Singh says, next time it should improve.

The team then demonstrates best practices for planting — nine inches deep, 18 inches between rows. It’s mostly the women of the village who have gathered to watch. The visitors tell them their village could someday add fruit trees to their terraces — excellent cash crops.

Their outdoor seminar takes place in the mountains, vertical carpets of summertime green. Stands of oak trees dot the landscape.

It’s uncertain how having relatively little snowfall will affect the surrounding villages in the years to come. Will their rushing natural springs slow? Will oaks be overtaken by evergreens?

What’s certain for Prem Singh Rana, a 39-year-old father of three, is that this village experiment holds promise. He managed to get his 200 lbs. of potatoes to market — there are only three or four cars in his village — and came home 2,000 rupees ($30) richer.

Rana is hopeful about the future. “Earlier, that land wouldn’t give me much,” he says. “But once I harvest the rest of the potatoes, I’ll have another $30 to $60.”

For Rana, that’s significant. This back-breaking cultivation has added 15 percent to his annual income. His earnings may seem small, but they are the result of something big: Finding advantage in climate change. 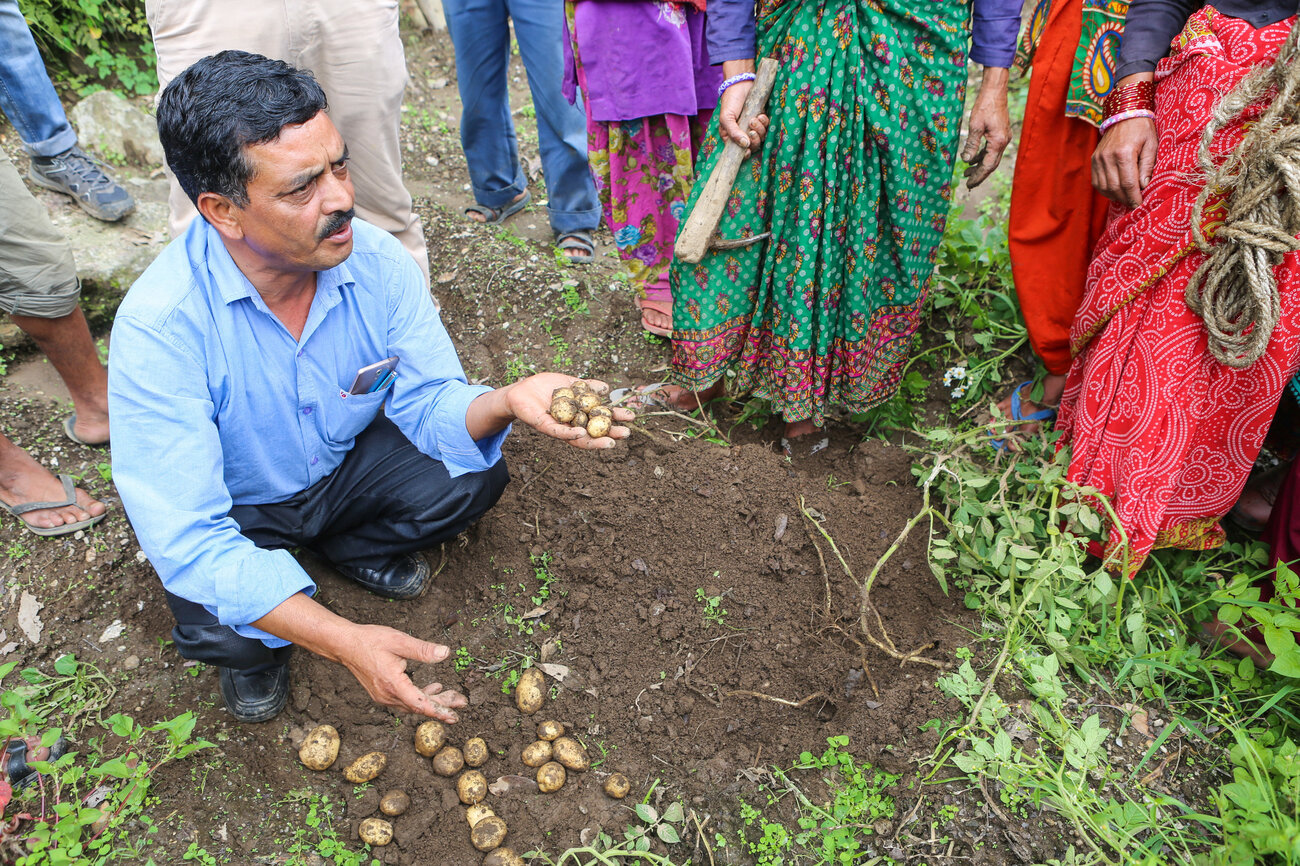 Bachi Singh, a field supervisor for TERI, demonstrates best practices for planting in a village in Uttarakhand. He says this village could someday grow fruit trees — excellent cash crops.