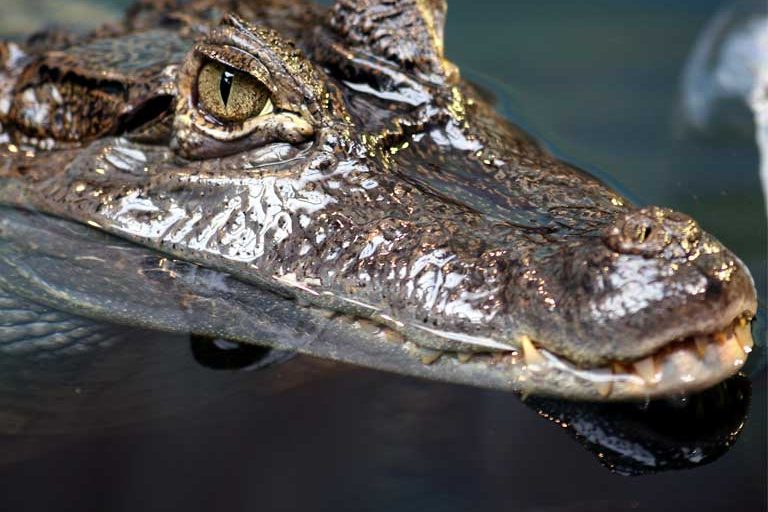 Spectacled caiman (Caiman crocodilus) skin is the most highly traded wildlife commodity coming out of the Amazon. Nearly 800,000 skins are exported annually, mainly from captive breeding centers in Colombia. Major importers are Singapore, Mexico, and Thailand. This is one finding in a new report that analyzes trade in CITES-listed species from Amazon countries for the first time. Photo by Kevin Law used under a CC BY-SA 2.0 license

The multimillion-dollar legal wildlife trade in species originating from Amazonian countries has been analyzed in detail for the first time. A new report produced by the UN Environment World Conservation Monitoring Centre (UNEP-WCMC), UK, identifies the major export routes for millions of animals and plants — from live parrots to caiman skins to orchids — being traded around the world.

The report covers all legal trade in Amazonian species — including wild-caught and captive-bred animals — worth US$128 million per year. Exports amounting to 14 million individuals, plus a further one million kilograms (more than 2.2 million pounds) by weight, included caiman and peccary skins for the fashion industry, live turtles and parrots for the pet trade, and arapaima, a large freshwater fish, for the food industry. Trade volumes fluctuated in response to changing trends, financial circumstances, and legalization of various aspects of the trade in Asian, European and North American markets.

UNEP-WCMC’s Pablo Sinovas, lead author of the report, said the work was addressing a knowledge gap flagged up by the Amazon region’s governments. This sentiment was echoed by Richard Thomas, of the NGO TRAFFIC (the wildlife trade and monitoring network), who said “far too much focus in recent years has been on the Asia-Africa trade flows, whereas the important trade in the Americas, especially Latin America, has largely been overlooked.” Thomas welcomed the report as “a valuable attempt to analyze and interpret the large volumes of trade in CITES-listed species.” 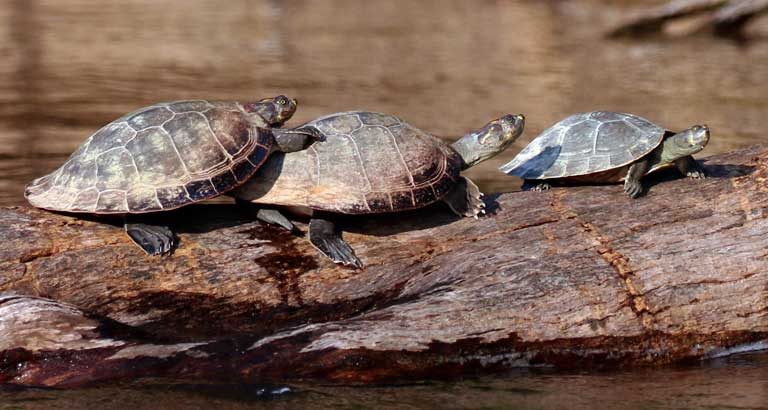 The Yellow-spotted Amazon river turtle (Podocnemis unifilis) trade has “rocketed” according to report lead-author Pablo Sinovas. Up to 300,000 live turtles are exported each year for the pet trade. “This level of exports is supported by active conservation and sustainable use programs in the Peruvian Amazon, where local communities ‘ranch’ the species,” Sinovas said. Photo by Charlesjsharp used under a CC BY-SA 4.0 license

The Convention on International Trade in Endangered Species (CITES) — a treaty between 183 parties (182 state governments and the European Union) — exists to ensure that threatened species are not overexploited. CITES-listed species must be traded within sustainable limits according to how much they are at risk, with all exports reported nationally. The new report compiled this data from the eight Amazon nations — Bolivia, Brazil, Colombia, Ecuador, Guyana, Peru, Suriname and Venezuela — for the period 2005 to 2014.

The single largest traded item was the skins of the spectacled caiman (Caiman crocodilus), with an average of 770,000 skins exported annually. These came primarily from captive breeding centers in Colombia, with Singapore, Mexico, and Thailand being the main importers, the report found.

The yellow-spotted Amazon river turtle (Podocnemis unifilis) was another major export, destined for Hong Kong and China. Trade in this species, which is listed as Vulnerable by the IUCN, has “rocketed,” according to Sinovas, with annual exports reaching as many as 300,000 individuals. “This level of exports is supported by active conservation and sustainable use programs in the Peruvian Amazon, where local communities ‘ranch’ the species,” he noted. Eggs (which have a high natural mortality rate) are collected, protected on artificial beaches to maximize the number of hatchlings, and then exported, while some of the captive bred juveniles are returned to the wild to replenish the species, Sinovas explained. 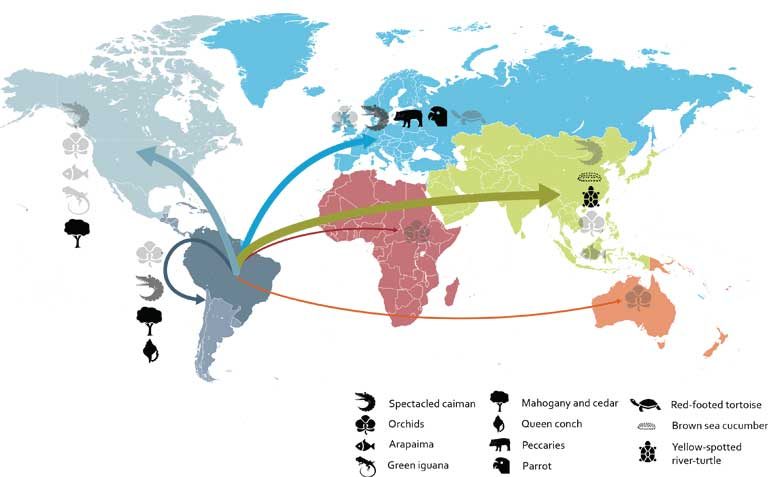 The new report, produced by UNEP-WCMC, found that 14 million individuals and one million kilograms of goods are legally traded each year, in an industry worth US$128 million annually. This figure illustrates the principal trade routes, and the main groups of commodities flowing along them. Groups are ordered by trade volume and shaded by source (black: >75 percent wild; dark grey: 25-75 percent wild; light grey: <25 percent wild). Arrow width denotes relative volumes. Figure courtesy of UNEP-WCMC

Arapaima (Arapaima gigas), a large freshwater fish, was traded both as an ornamental species and for meat. Recent years have seen annual exports of 30,000 fish originating in Peru heading to aquaria in Hong Kong, and 100,000 kilograms (220,462 pounds) of meat from Peru and Brazil destined for shops and restaurants in the United States. Orchids — 150,000 plants per year, almost all artificially propagated in Brazil, Ecuador and Venezuela — and mahogany timber were the main plant products seen on the market.

Particularly noteworthy, according to Sinovas, were the “relatively large volumes of wild-sourced parrots, reptiles and amphibians exported from Guyana and Suriname.” Large swaths of pristine forest exist in these countries, he explained, which have “the potential to host substantial populations of the harvested species.” However, while this trade is legal, it is important to note that population data, and information determining what levels of harvest would be sustainable over time, is often lacking, Sinovas said. Without such data, overharvesting is always a risk. 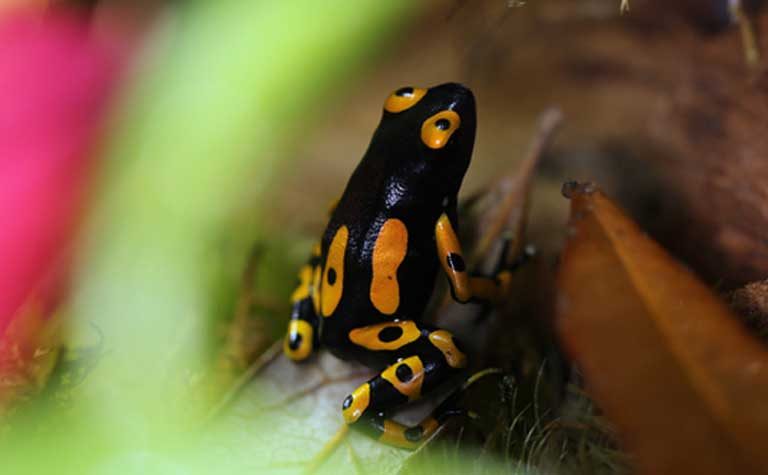 A yellow and black poison dart frog. Live frogs, along with turtles, parrots, snakes, and caiman, were exported from Amazonian countries for the pet trade. Photo by Rhett A. Butler / Mongabay

Another important trend documented by the report was the development of trade in species from non-native countries, often as a result of the banning of trade from their country of origin. This includes “parrots native to the Amazon being bred and exported by South Africa, [and] succulent plants (such as cacti) native to Amazon countries being propagated and exported by Kenya,” said Sinovas. “Some of these species are in fact single-country endemics.”

Trade of this kind “raises issues related to access and benefit sharing of biological resources, which are also touched on in the study,” said Thomas. One of the report’s recommendations is that Amazonian countries consider the implications and opportunities that non-native trade presents, including the potential for the “repatriation of knowledge on breeding techniques or biology that may have been developed abroad.”

Other recommendations include the need for the documentation of management practices that result in positive livelihoods and conservation impacts, the identification of additional species that may need CITES listing, and the development of traceability throughout supply chains. Collecting and sharing information and knowledge across the region, about best management practices that preserve healthy wild populations, is also recommended.

Although illegal trade was not the report’s focus, its findings can be used to identify areas where illicit trafficking may become a problem. “[I]f there’s high demand for a particular species, there may well be a temptation to exceed harvest quotas, or bypass relevant taxes or use fraudulent permits,” Thomas explained.

The report also flagged noteworthy trends in the data with trade sharply increasing, or involving threatened species. This was seen, for example, in the threatened forest tortoise (Chelonoidis denticulatus), which saw a sharp increase in live exports from Guyana, and the dyeing poison frog (Dendrobates tinctorius), which is not currently of conservation concern, but was traded in high volumes from Suriname. Such cases may demand further regulatory attention by governments to ensure sustainable trade levels are maintained.

Both Sinovas and Thomas agree that wildlife trade can be a real boon, both for the countries involved, and potentially for the species too — but only if certain regulatory and enforcement challenges can be met. “Maintaining trade in a well-managed, legal environment has the potential to provide huge economic benefits to South American countries indefinitely,” Thomas said. Trade in wild-sourced animals “provides potential incentives for conservation of these species and associated habitats,” added Sinovas. 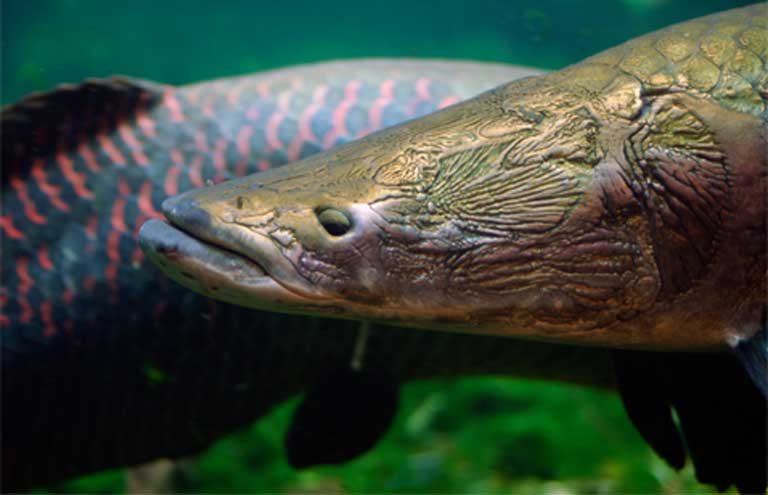 Arapaima (Arapaima gigas), a large Amazon freshwater fish, was traded both as an ornamental species and for meat. Recent years have seen annual exports of 30,000 fish originating in Peru heading to aquaria in Hong Kong, and 100,000 kilograms (220,462 pounds) of meat from Peru and Brazil destined for shops and restaurants in the United States. Photo by Jeff Kubina on Flickr used under a CC BY-SA 2.0 license

Amazon challenges include a lack of baseline data for some species or regions, as in the case of parrots and reptiles exported from Guyana and Suriname. Captive bred specimens remove this concern, but bring their own problems, he said, “namely the dissociation between economic benefits and wildlife/natural habitats, potentially removing conservation incentives. This requires careful balancing.”

Oversight and policing of the wildlife trade, to ensure it is kept within legal, sustainable levels — regulation and enforcement often inadequate in South American nations — is a key priority that needs to be addressed and met with adequate resources from governments, said Thomas. “Failure to do so could lead to irreversible loss of natural resources.”

APRIL Loses Legal Basis for Operations Due to Non-Compliance