German Chancellor Angela Merkel closed the G20 summit in Hamburg with a rebuke to US President Donald Trump’s stance on climate change, but the group appeared to make a concession on his protectionist trade policies.

World leaders had been at an impasse over an increasingly isolationist United States and Trump’s climate change and trade policies for most of the summit, and Merkel had made it clear that the US had made talks difficult.

“Unfortunately — and I deplore this — the United States of America left the climate agreement, or rather announced their intention of doing this,” Merkel said as she closed the summit and presented a G20 declaration. 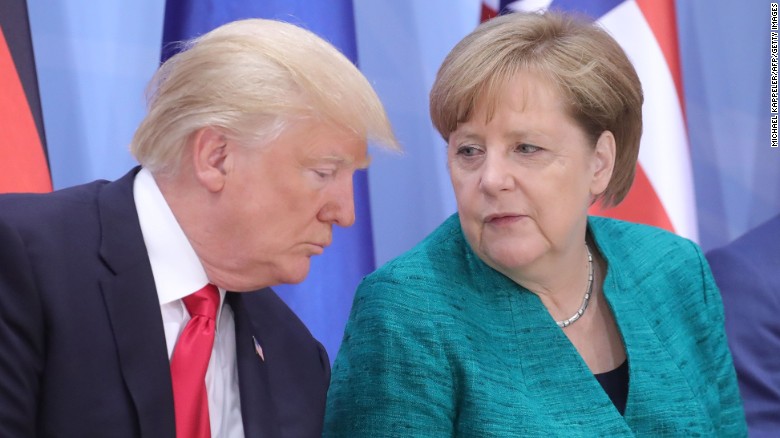 US President Donald Trump and German Chancellor Angela Merkel at the G20 summit on Saturday.

She said that the other 19 members of the G20, which includes the European Union, agreed that the Paris accord was irreversible and that they remained committed to it.

Trump faced a chorus of global outrage last month when he announced he would withdraw the US from the agreement, which obliges countries to reduce their carbon emissions to ward off catastrophic global warming.

The G20 declaration noted the US’ withdrawal from the accord but said the country affirmed its “strong commitment to an approach that lowers emissions while supporting economic growth and improving energy security needs.”

Russian President Vladimir Putin said after the summit that climate change was a “major issue” and said Merkel reached a “good compromise” at the summit.

“But the compromise was reached that although the US will withdraw, they are nevertheless still prepared to carry on now (with) discussions on this subject. It seems to me this is a very positive point and can be chalked up to the successes of Angela Merkel,” Putin said.

British Prime Minister Theresa May said she was “dismayed” at the US climate stance, adding that she had urged Trump to reconsider his position.

“This is the narrative that we have been sharing… and was enthusiastically supported by just about everyone here at the G20.”

In her remarks, Merkel appeared to come down hard on Trump’s protectionist trade policies, saying she was glad that leaders agreed that “markets need to be kept open.”

“This is all about fighting protectionism and also unfair trade practices.”

But the declaration made concessions for “the role of legitimate trade defense instruments,” in a sign that leaders had given into the US.

Trump won the 2016 election on an “America First” platform and vowed to pull the country out of several multilateral trade deals and negotiations.

The US had threatened to impose new tariffs on steel imports into the country, a comment that prompted European Commission President Jean-Claude Juncker to threaten the same in return, raising fears of a trade war.

Much of the attention at the G20 has been on a bilateral meeting between Trump and Putin on Friday.

Putin told reporters Saturday that Trump appeared to agree with Moscow’s position that it did not interfere in last year’s election during their bilateral talks.

“I repeat, he asked a lot of questions on this matter,” Putin said at a Saturday press conference. “I answered as many as I could answer. I think he took it into consideration and agreed with it. But you should ask him what his opinion is on that,” Putin said.

On Friday, a senior Trump administration official told CNN that Trump did not accept Putin’s claim of noninterference in the US election.

Asked specifically how Putin views his relationship with Trump, the Russian president said, “and regarding personal relationship … I think it was established. I don’t know how this will sound, but I’ll tell you how I see it. TV Trump is very different from the real person, he is absolutely specific, absolutely adequate in his perception of the dialogue partner, he analyzes things quickly, replies to the raised questions or new elements of the conversation. So I think if our future relations will unfold the same way as our meeting yesterday, there is every reason to believe that we can restore, at least partially, the level of cooperation we need.”

The G20 summit has been marked by protests against capitalism, globalization, climate change and the concentration of power among the 20 nations. They have been