Why Total Ban on Wildlife Trade Could Make Matters Worse

What if ‘green’ economic recovery isn’t the best thing for the climate?

Leaders of 19 nations at the G20 summit in Germany have renewed their pledge to implement the Paris deal on climate change, despite the US pulling out.

Deadlock over the issue had held up the last day of talks in Hamburg but a final agreement was eventually reached.

It acknowledges President Donald Trump’s withdrawal from the Paris climate agreement without undermining the commitment of other countries.

The compromise comes after violent protests in the host city.

The joint summit statement released on Saturday said: “We take note of the decision of the United States of America to withdraw from the Paris Agreement.”

However, the leaders of the other G20 members agreed the accord was “irreversible”.

The statement also said the US would “endeavour to work closely with other countries to help them access and use fossil fuels more cleanly and efficiently”.

Mr Trump has pledged to help the US coal industry make a comeback and has previously characterised the Paris agreement as being aimed to disadvantage his country’s workers.

As the summit drew to a close, German Chancellor Angela Merkel said she still deplored Mr Trump’s position on the Paris accord but she was “gratified” the other 19 nations opposed its renegotiation.

Where do we go from here?

“I think it’s very clear that we could not reach consensus, but the differences were not papered over, they were clearly stated,” Mrs Merkel told reporters.

She said she did not share the view of UK Prime Minister Theresa May that Washington could decide to return to the climate agreement.

But Mrs May reiterated her belief that the US could rejoin the accord in her news conference on Saturday.

And French President Emmanuel Macron also remained hopeful of persuading Mr Trump to change his mind, saying: “I never despair of convincing him because I think it’s my duty.”

He announced that Paris would host another summit on 12 December to make further progress on the climate agreement and to address financing.

Why have there been street battles in Hamburg?

There have been large protests on the streets of Hamburg, with demonstrators and armed police clashing into the early hours of Saturday.

Demonstrators – who were protesting against the presence of Mr Trump and Mr Putin, climate change and global wealth inequalities – set fire to vehicles and barricades, threw rocks at officers and looted shops. 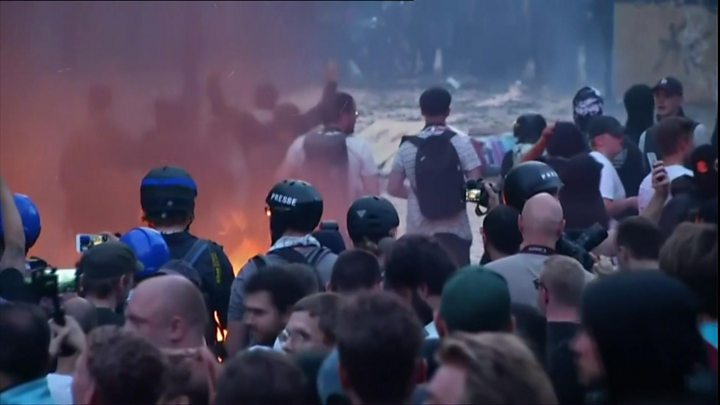 At one point, police chased protesters across rooftops while officers on the streets used water cannon on protesters.

Nearly 200 police officers were injured during the protests. Dozens of protesters have been detained.

What else happened at the summit?

President Trump met Prime Minister May on the sidelines of the summit on Saturday and said a US-UK trade deal would be signed soon.

He also confirmed he would visit the UK, but said the details had still to be worked out. 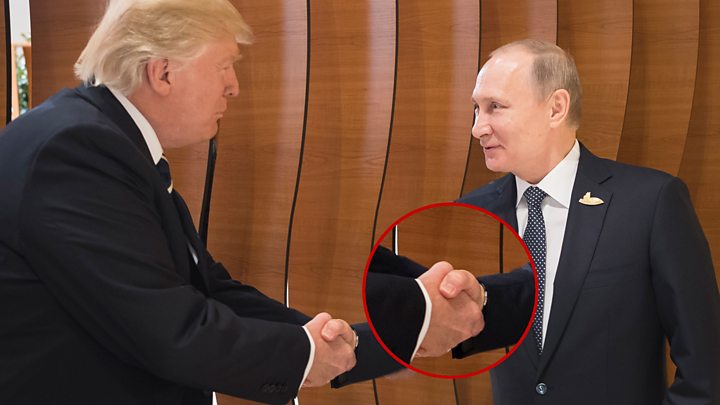 Media captionWho had the dominant handshake and who couldn’t maintain eye contact?

On Friday, the US president used his first meeting with Russian President Vladimir Putin on the sidelines of the G20 to discuss the alleged Russian hacking of last year’s US presidential election.

President Putin said on Saturday he believed President Trump had accepted his assurances that Moscow had not interfered in the vote.

He said he had established a working relationship with his US counterpart and a ceasefire in southern Syria – agreed between the US, Russia and Jordan on Friday – was a result of America becoming more pragmatic.

Extinction Rebellion supporters are more likely to be new to protesting than other environmental activists, a new study shows....