Indonesians Plant Trees to Nurse Seagrass Back to Health in Wakatobi

Indonesians Plant Trees to Nurse Seagrass Back to Health in Wakatobi

Seagrass, the “ugly duckling” of the conservation world, is a vital lifeline for thousands of communities around the globe and an efficient absorber of “blue carbon.” It is also quickly disappearing. In Indonesia’s Wakatobi National Park, a community-focused tree-planting initiative is helping protect seagrass meadows and foster a new generation of environmentally aware children.

Seagrass, an underwater flowering plant that grows in coastal regions, doesn’t get much attention. But without it we’d be in a pretty poor state. We now know, for instance, that some seagrass meadows naturally store large quantities of blue carbon – the carbon dioxide captured by the world’s oceans and coastal ecosystems – in their roots and soil, and could well soak up more climate change-inducing CO2 than rainforests.

Indonesia is an important country for seagrass conservation. Its seagrass beds and mangrove stands are thought to hold some 17 percent of the world’s blue carbon reservoir, according to conservative estimates.

Without seagrass we probably wouldn’t have coral reefs as we know them and they’d be much less beautiful for it, said Benjamin Jones, a founding director of environmental charity Project Seagrass. Around 400 species of fish in Indonesia rely on seagrass for their growth and development.

So what may seem like endless ranges of underwater grass, typically overlooked by divers on their way to colorful reefs, are actually vibrant and diverse “secret gardens of life,” according to Jones. 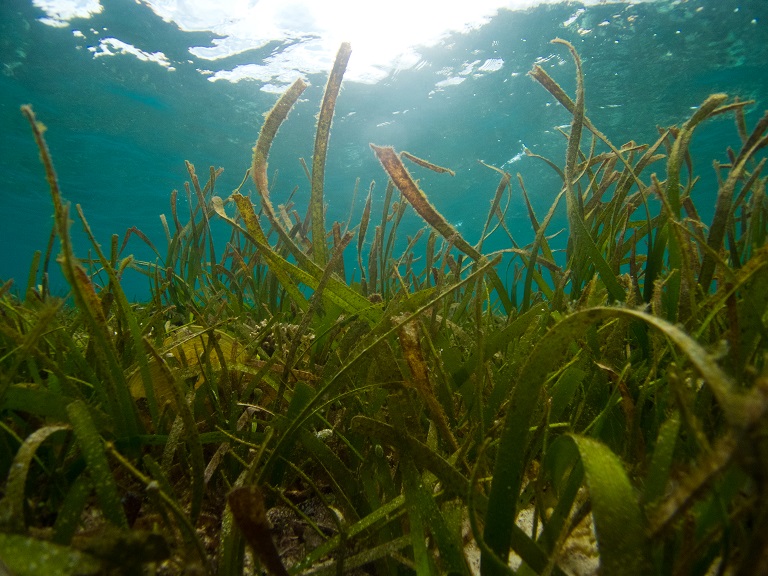 Healthy seagrass on the ocean floor. Seagrass provides an important source of income and food forcommunities around the world, but its importance often goes unnoticed. Photo courtesy of Benjamin Jones/Project
Seagrass.

But seagrass beds aren’t just beautiful and misunderstood habitats that happen to be good in a fight against climate change; they have an abundance of other uses. One study, published last year in scientific journal PlosOne, puts the number of global seagrass “services” at around 25. “The human benefits of seagrasses are extensive, and seagrasses are even more valuable than previously thought,” the authors write.

Items on that list include stabilizing coastlines, housing fish and serving as a source of food, protein and ingredients used in medicine, pharmaceuticals included.

According to one study, as much as half of all fish caught in marine protected areas in the Coral Triangle — a region in the Western Pacific that includes Wakatobi National Park — are supported by seagrass-based fauna, accounting for 54 to 99 percent of all protein intake in some cases. Not only are seagrass meadows an important source of income, they are an important lifeline for entire communities.

From river to sea

Indonesia is home to perhaps the world’s largest concentration of seagrass, over 30,000 square kilometers by some counts. Much of this expanse has not been studied at all. “We have no idea how much seagrass there was in Indonesia or how much is being lost,” Jones explained. “We know what the threats are. But we can’t put a figure on the rate.”

The list of threats to seagrass is long and it really depends on where you are talking about, Jones said. Small-scale coastal development, agricultural runoff, overfishing, coral and sand mining, oil pollution and sedimentation are some of the main threats in Indonesia.

The problem is that seagrass conservation doesn’t stop at the shoreline, said Angela Quiros, a University of California marine biologist. She carried out a study in the Philippines that looked at the impact of marine protected areas on seagrass conservation. What she found was that land use is more important to the conservation of seagrass beds than inclusion within an MPA. While marine protection is of importance to preserve seagrasses, watersheds must also be safeguarded and land use monitored carefully.

In Wakatobi, seagrass makes up part of the “holy trinity” – coral, mangroves and seagrass – three ecosystems that form the basis for the park’s incredible biodiversity, earning it renown as a UNESCO World Heritage Site. Yet, as Jones argues, the importance of seagrass has long been overlooked from a conservation perspective and for its regional importance.

The result is that the region’s seagrass is generally in bad condition, according to a Wakatobi National Park officer who asked to remain anonymous because they were not authorized to talk to the press.

Jones agreed. He explained that swaths of seagrass are covered in epiphytes, a microscopic algae that settles on seagrass leaves. Nutrients from the land have allowed algae to grow, while overfishing of key fish species – which would usually prune the epiphytes from seagrass leaves – has led to losses.

On the island of Kaledupa in Wakatobi, a joint initiative between Project Seagrass and FORKANI, a local NGO, engaged with communities to understand how to protect and restore seagrass beds. Earlier this year they started planting trees to save seagrass. 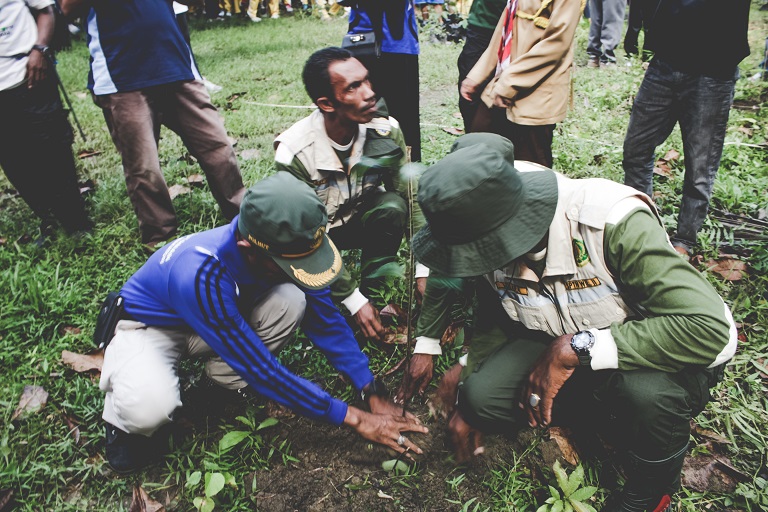 Teenagers and school groups also took part in tree planting. Seagrass education has been included in local school curriculums so all children grow up knowing its importance. Photo courtesy of Benjamin Jones/Project Seagrass.

First, the researchers sought out local opinions on the main risks to seagrass. Sedimentation came back as the winner. Years of turning forest into farmland had increased runoff into rivers, smothering seagrass. Seagrass can capture sediment, but lots of dumping diminishes water quality and clarity, cutting off light needed for photosynthesis.

The loss of both forest cover and coastal mangroves (previous estimates say around 15 percent of Kaledupa’s mangroves have already disappeared) also affected water retention on the island, Jones said. Planting trees was thus a double winner.

Following discussions with local residents and a mapping exercise carried out by FORKANI, the best sites to plant trees were identified. Over time, it was hoped the trees would limit sedimentation, rebuild water retention, protect seagrass and provide an additional source of income for farmers.

By now, around 4,500 trees have been planted along Kaledupa’s riverbanks.

“The island as a whole, every community on that island has kind of gotten behind it,” Jones said. “Although they aren’t likely to see the benefits for a number of years, they are really keen to protect their seagrass meadows.”

But planting trees hasn’t been the only work.

The project also opened discussions about overfishing, an obvious threat but a sensitive subject to broach with community members.

“People are so connected to the seagrass meadows that you can’t say nobody can fish there anymore,” Jones explained. “Although we are experts, [and] we may have recognized that the amount of fish that they’ve been extracting is a really big threat, we haven’t lived in these places our entire life. We haven’t witnessed how they’ve changed.”

One of the problems is the use of “fish fences” which usually have a small mesh size, catching small and big fish alike. This can leave usually biodiversity-rich seagrass more like an empty underwater wasteland.

But to date, there has been some success in tackling overfishing, said FORKANI member Nusi, who like many Indonesians goes by one name.

FORKANI is in discussions with local community members and the local government to set up no-take zones, where fishing is entirely or partly prohibited. And mesh sizes have been increased to allow small and juvenile fish to escape the nets. 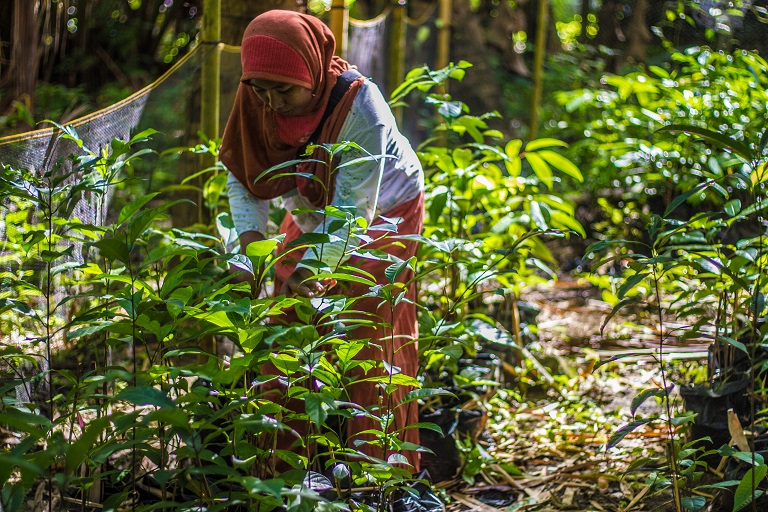 Women in particular have been a key weapon in FORKANI’s campaign, Nusi explained. She said that unlike coral reefs, which are fished mainly by men, seagrass beds are open to all, and women frequently visit them during low tide to gather crabs, sea cucumbers or fish. “When we say it has an impact on their food, their income, their children and their future, it’s easy to make them care.”

Once the women are on board, they can begin to change the actions of their entire family, from the men who fish to their children who often accompany them. Likewise, the younger generations are receiving an education in seagrass after the local government agreed to include conservation issues in the school curriculum.

Tree planting is focused on Kaledupa for now, but Nusi said there were plans to extend the program throughout the region. Other communities have already expressed interest in planting their own trees.

Nusi hopes that over time people across Indonesia’s thousands of islands will develop an understanding of the importance of seagrass, before it’s too late. “For a long time they just see it like a boundary between coral and mangroves,” she said. “It would be better if everyone in Indonesia can understand seagrass.”