Climate change is essentially tied with the Islamic State as the most-feared security threat across much of the world — except in the United States, where cyberattacks are considered a greater danger than global warming, according to a Pew Research Center report released on Tuesday.

Residents of 13 countries ranked climate change as the greatest threat to national security, while in 17 countries the Islamic State was considered a more immediate problem.

In the United States, however, a gaping partisan divide pushed climate change to third-most severe perceived threat, after ISIS and cyberwarfare. Just 56 percent of Americans surveyed identified global warming as the most serious threat to the country, compared to 71 percent for cyberwarfare and 74 percent for Islamic State attacks.

The American intelligence community concluded that Russia used cyberweapons to interfere with the presidential election last year, perhaps accounting for the heightened sense of threat. The Trump administration has consistently played down the dangers of a warming climate and has withdrawn the United States from the Paris accord on climate change signed by nearly 200 nations.

Jacob Poushter, Pew’s senior researcher and a co-author of the study, said that in most countries terrorism and climate change were seen as the most pressing dangers. The United States was an exception, he said. 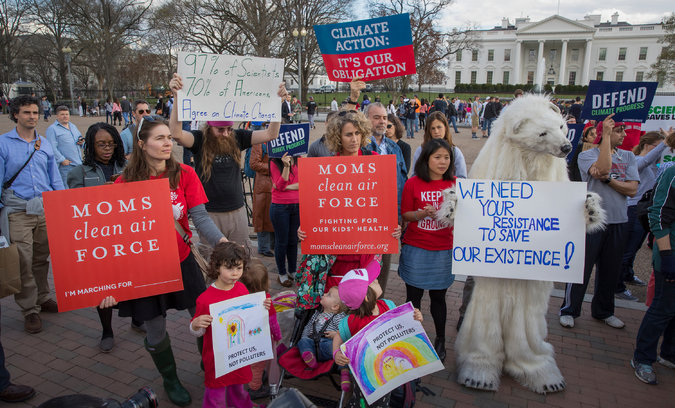 “The stark partisan divide between those on the left and the right means there is a large portion in the United States that doesn’t see climate change as a threat,” Mr. Poushter said. “But there’s a large percentage that does, so that lowers the number.”

The survey of 41,953 people in 38 countries was conducted from February through May. Beyond the top line figures, the survey offers other insights about how people around the world view global warming.

While Latin America is certainly vulnerable to the consequences of climate change, its countries rarely rank among the most at risk. That unfortunate distinction tends to go to Chad, Sudan, low-lying island states and other places where poverty and civil strife meet rising seas, floods and drought. So it’s not surprising, perhaps, to see so many countries in Africa put climate change at the top of their worry lists.

But 74 percent of people surveyed in seven South American and Latin American countries cite climate as their top global concern, the highest of any region surveyed.

The Intergovernmental Panel on Climate Change offers some clues, citing “significant trends in precipitation and temperature” across the region. Paula Caballero, global director of the climate change program at the World Resources Institute, a Washington-based think tank, noted the multiple devastating floods this spring in her native Colombia.

“In Latin America the impacts of climate change both in terms of extreme events as well as the intensity and frequency of events has really gained momentum,” said Ms. Caballero, who formerly served as Colombia’s lead United Nations negotiator on climate change.

Even in Venezuela, the only Latin American country surveyed that did not name climate change as its top concern, global warming came in just below worries about the economy. In the midst of its own political and economic crisis last month, Venezuelan leaders ratified the Paris Agreement.

Russians are among the least concerned about warming

The Russian heat wave of 2010 was made three times more likely by climate change, a study later found. But Russians are generally apathetic about rising greenhouse gas emissions, the Pew survey confirmed. The country backed the Paris agreement on climate change but the Russian president, Vladimir V. Putin, did not denounce President Trump for abandoning the accord, as so many other world leaders did.

Mr. Putin’s views on the subject are opaque, though. Before the Paris accords he told world leaders that global warming “was one of the gravest challenges humanity is facing.”

Russia ranked climate change fifth among its global concerns in the Pew survey, below the Islamic State, the economy, the refugee crisis and the influence of the United States.

We have long known Americans break heavily along party lines over the causes, solutions and very existence of man-made climate change. The Pew study lays that chasm bare.

Among Americans who consider themselves left-leaning, 86 percent cite rising emissions as a dangerous threat, compared with only 31 percent on the right. That 55 percent divide is larger than the partisan split on ISIS and on the migrant crisis.

Terrorism is the biggest worry for Americans, with 74 percent putting ISIS as the top threat to the country. Close behind are cyberattacks.

Mr. Poushter noted the surveys were conducted in the spring amid national attention on the finding that Russia meddled in the 2016 presidential election by hacking Democrats’ emails and distributing online propaganda.

Climate change is ranked third among Americans, with 56 percent of people surveyed believing it is a major threat.

Anthony Leiserowitz, director of the Yale Program on Climate Change Communication at Yale University, said the ideological split in America underscores the divisions he has witnessed in his own studies of how Americans perceive climate change.

“Climate change is in many ways a small skirmish in the midst of a much larger political struggle that’s been going on in this country since its founding,” he said. “What’s the relationship between government and a society of free individuals? That’s playing out across the board on a lot of other issues, from tax policy to health care.”

Pew did not survey many of the top oil exporters other than Russia, so it’s hard to know how people feel in Saudi Arabia, the United Arab Emirates or Kuwait. But among the world’s biggest coal exporters the story is a fairly nuanced one.

Citizens of Indonesia, a top coal exporter in 2014, according to the World Coal Association, listed ISIS as their highest concern. Attacks in Jakarta this spring have set people on edge, and the country’s military chief has warned that the Islamic State group has so-called sleeper cells all over the country. But climate is still seen as the third biggest threat, after the economy. Australia, also a coal-exporting giant, cited climate change as the second greatest threat after ISIS.

And among the big coal importers? Only 47 percent of people in India surveyed named climate change as a top concern, but that was enough to put the issue second after ISIS. In South Korea, 79 percent of people are worried about the climate.

Mr. Poushter said Pew did not survey China this year because of a law restricting research by foreign organizations. But a similar survey Pew conducted in 2015 found 19 percent of Chinese people polled considered themselves “very concerned” about climate change. That is low, particularly compared with the 79 percent of Indians who were very concerned about warming at the time. But it also was the highest level of worry Chinese residents assigned to any global threat.

The Indigenous Fight Against Climate Change