The sustainability and legality claims of the largest plywood importer in the US have come under question after it was found to have received shipments of Malaysian plywood worth more than $500,000 from a supplier connected to environmental and human rights violations.

The 600 cubic meters (21,200 cubic feet) of plywood that Liberty Woods bought in January 2017 came from Shin Yang, a company that operates in the Malaysian state of Sarawak on the island of Borneo, according to the investigative non-profit organization Earthsight. Shin Yang, based in Miri, Sarawak, has faced repeated allegations that it does not manage its timber concessions sustainably and that it impinges on the rights of local indigenous communities, potentially making the wood it harvests illegal. A US law called the Lacey Act bans companies from importing illegally cut timber.

“[Liberty Woods] can’t possibly know that their products are Lacey-compliant,” Sam Lawson, director of Earthsight, said in an interview. The London-based organization published its report today. It launched a new “muckraking” newsletter and website called Timberleaks that will publish regular reports detailing instances of sustainability or legality issues with wood that is imported into the US and Europe. Other stories in the first issue highlighted imports of African logs into France and Burmese teak by US firms. 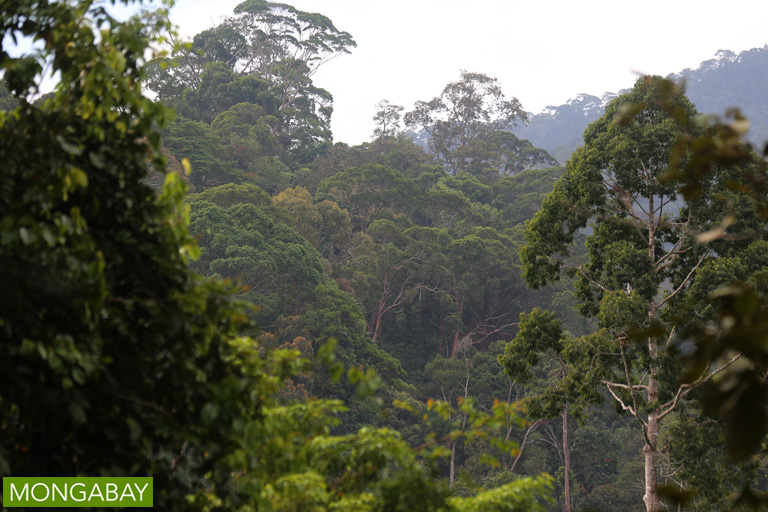 Natural rainforest in Sarawak. Photo by Rhett A. Butler / Mongabay.

Earthsight investigators found that Liberty has been purchasing plywood from Shin Yang since 2010 and possibly earlier. Since that time, Shin Yang and other timber companies operating in Sarawak have been linked to corruption and malpractice. In 2013, a local community took Shin Yang to court for not obtaining consent before it began logging on its turf. Satellite imagery indicates that the company cleared land that had been proposed for a national park.

On its website, under the heading “We care about the environment,” Liberty says, “We fully support and seek out suppliers that are environmentally responsible and that have received third party certifications.”

Shin Yang does operate a concession in Sarawak that is certified by the Programme for the Endorsement of Forest Certification, or PEFC, an international organization. In Liberty’s case, however, documents from the certification firm Global Forestry Services show that the Shin Yang mill in the town of Bintulu, from which Liberty’s plywood originates, also gets logs from concessions that are not certified and lie within the boundaries of the proposed international conservation area known as the Heart of Borneo.

In a telephone conversation with an undercover Earthsight investigator, a Liberty Woods representative confirmed that the plywood it buys from Shin Yang is not certified, making it unlikely that the raw materials came from the certified concession, Lawson said.

Global Forestry Services did sign off on the legality of Shin Yang’s two concessions that fall within the Heart of Borneo using “a local government standard.” But according to Earthsight, the investigations behind these certifications were not comprehensive, as the certifiers did not see the whole plantation nor did they account for any past violations.

In addition, “It’s not just about the legality side of things,” Lawson said.

Portraying Liberty’s products as coming from sustainably harvested tropical hardwoods because the raw materials were stamped as legal is an affront to Liberty’s consumers who believe they can trust that the wood they’re purchasing didn’t come at the expense of environmental degradation or displaced communities, he said.

Lawson pointed to an article about the meranti plywood trade in Sarawak on the website of the International Wood Products Association, a US industry group. Meranti is the commercial name for timber products coming from a genus of hardwood trees found in Southeast Asia’s rainforests. It is typically used to make boats, cabinets and furniture. The story argues that the sale of meranti helps fund a rehabilitation center in Sarawak.

“Orangutans are huge enthusiasts,” the association wrote in the article. 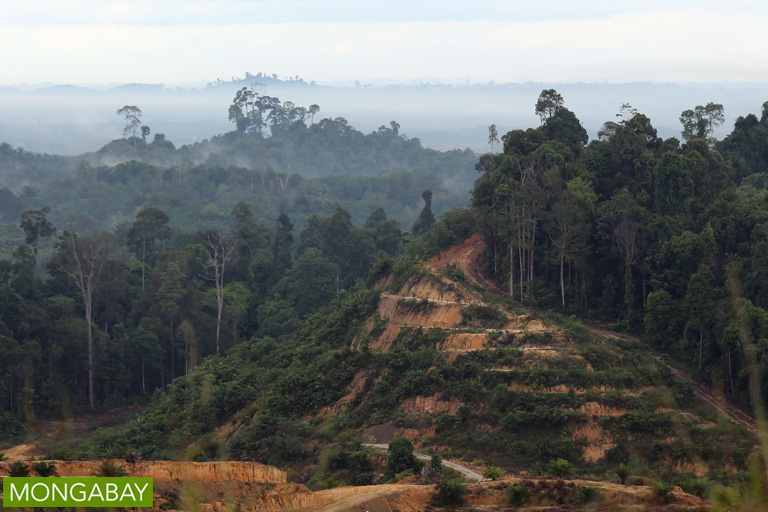 In Sarawak, land once cleared for its timber is often converted to oil palm plantations. Photo by Rhett A. Butler / Mongabay.

Lawson said that any such claim is “utterly misleading.” It may well be that some of the money from the purchase of these materials does go to funding orangutan rehabilitation, Lawson said, but that ignores the broader issue of why those orangutans are there in the first place.

“In reality this tiny centre likely owes its very existence to the supply of homeless orangutans stemming from the destruction [that] the logging and plantation industry has wrought” in Sarawak, Earthsight writes in its report.

Liberty’s president, Roy Polatchek, is also quoted in the article: “Contrary to what some may believe, logging on properly managed forests can actually help to maintain forested lands.”

But much of the evidence indicates that the forests under Shin Yang’s control aren’t properly managed, Earthsight says.

In 2015, the NGO Global Witness reported that Shin Yang was clearing nine square kilometers per month — 3.5 square miles, or the equivalent of 42 soccer fields each day — in an area that was being considered for a national park and is also within the Heart of Borneo. 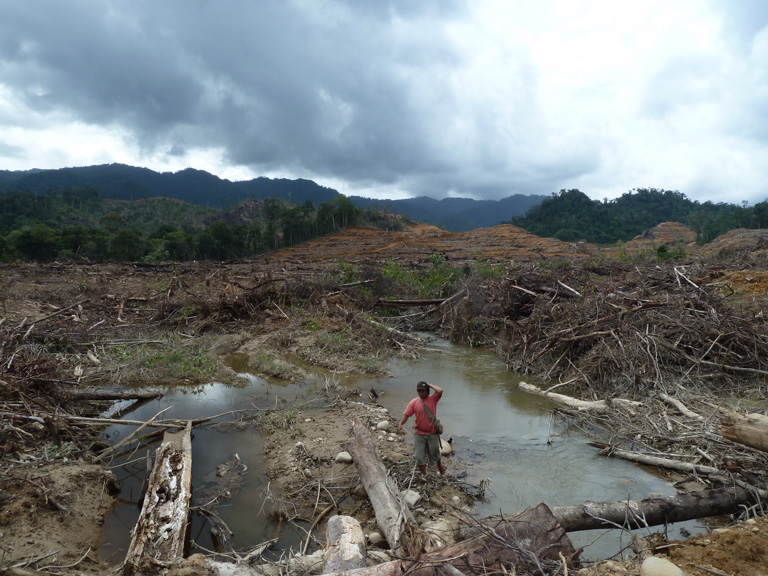 The organization has also told Japan’s government that Shin Yang did not inform the Penan village of Long Jaik before it began harvesting timber in 2006, and delivered a letter from the village’s headman, Matu Tugang, explaining the destruction at the hands of Shin Yang’s crews.

Annina Aeberli, a campaign leader with the Bruno Manser Fund, said that they haven’t received a response from Japan’s government, despite the fact that the wood is being used to prepare for such a high-profile event on the international stage.

“It’s really disappointing that they are just not taking this issue seriously at all,” Aeberli said in an interview.

Under the UN Declaration on the Rights of Indigenous People, she said, “If their consent was not given, it’s actually not legal what they are doing.”

Instead, for decades, loggers could more efficiently secure a license to harvest timber by allegedly paying a bribe to Sarawak’s former chief minister, Abdul Taib Mahmud — what Aeberli described as an “open secret” in Sarawak.

Taib left office in 2014 and is currently the ceremonial head of the state. During his 32 years in power, his and his family’s net worth was pegged at around $15 billion, according to a book published in 2014.

Satellite images visualized on Google Earth show the changes in the forested landscape on a Shin Yang concession between 2009 and 2015. Image courtesy of Earthsight.

Taib and other officials in Sarawak have defended the state’s environmental practices, paving the way for the wood to be tagged as legal before it leaves Malaysia’s shores. They have claimed that 84 percent of the state still has natural forest cover and that a million hectares (2.47 million acres) of Sarawakian forest are protected. But 2014 analysis of satellite imagery by Global Witness revealed that only 5 percent of the forests in Sarawak are still relatively untouched. And only about half of the state’s claimed protected areas are currently in place. Some half million hectares are planned for conservation – such as the area logged by Shin Yang — but have yet to be officially designated as such.

Mongabay’s own analysis of satellite data obtained through Global Forest Watch confirms that Shin Yang is operating on the site of the proposed national park. In addition, the company’s concession covers an area that had been part of an unbroken stretch of forest known as an intact forest landscape before the year 2000 and in one area as recently as 2010.

These systemic issues in Sarawak contribute to Malaysia’s deforestation rate, the highest in the world between 2000 and 2012. There are also reasons, from Earthsight’s perspective, for companies like Liberty Woods to invest more in “due care” to better understand their supply chains. 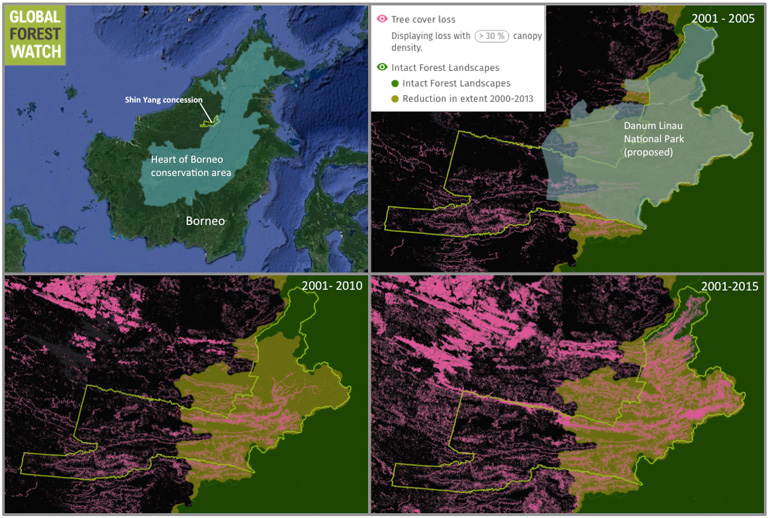 Data from the University of Maryland visualized on Global Forest Watch shows the loss of tree cover within a Shin Yang concession in Sarawak, which overlaps with the proposed Danum Linau National Park. Parts of the concession were unbroken sections of forest known as intact forest landscapes as recently as 2010. Map courtesy of Global Forest Watch.

Although due diligence isn’t specifically required by the Lacey Act, several industry organizations, including the International Wood Products Association and the Hardwood Plywood and Veneer Association, counsel their members to carry out environmental and financial investigations when purchasing “high-risk” commodities such as plywood to figure out where the wood that they’re buying came from. In large part, that’s because companies can use evidence of these inquiries to avoid the highest fines if one of their suppliers ends up being negligent.

“In the context of Shin Yang wood, I think it is really legitimate to say that at least you should question the legality of the wood that they are using,” Aeberli said. “[Companies buying from Sarawak] really need to have a closer look at the company that they’re getting the wood from and the situation of the communities.”