Saving The Serranía de San Lucas, a Vital Link in The ‘Jaguar Corridor’

Saving The Serranía de San Lucas, a Vital Link in The ‘Jaguar Corridor’

The “jaguar corridor” is a historic link that runs from Mexico all the way down the spine of Central America, crossing the inhospitable wilderness of the Darian Gap, through Colombia and into the Amazon basin – the last stronghold of the species. Colombia links Central America to the rest of South America; zooming into the country brings you to the Serranía de San Lucas, a high and isolated tract of biodiverse forest that conservationists say is vitally important if jaguars are to have longevity as a species. But the forest is also rich in much more than biodiversity, creating widespread illegal gold mining that has disturbed its forests and polluted its waters.

Despite covering three continents and spanning 18 countries, the jaguar is just one species. That’s due to a historic thoroughfare that has connected populations for hundreds of years, allowing individuals to wander, breed and maintain genetic connections.

In Colombia, the 110-kilometer Serranía de San Lucas is an integral part of the Jaguar Corridor, a bridge that connects the jaguars of the north with those in the Amazon Basin. Dr. Esteban Payan of Panthera describes it as the “key stepping stone” between these populations, which allows a continuous flow of genes. He said maintaining this connection is necessary to protect jaguars in the long-term, a time period Payan measures in the hundreds of years.

The jaguar (Panthera onca) is listed by the IUCN as Near Threatened at a global level. However, a study released earlier this year in the journal Oryx found that outside the Amazon Basin most populations should be considered either endangered or critically endangered if they were to be assessed independently. The jaguar population in the Paramillo-San Lucas forest area would be listed as critically endangered, according to the authors.

“The Paramillo-San Lucas complex is really critical,” said José Gonzalez-Maya, director of PROcat Colombia and a coauthor of the study. “It’s the only place in northern Colombia with a good population of jaguars.” He said the area is probably more important to the survival of the jaguar than any other region in the entirety of northern South America. 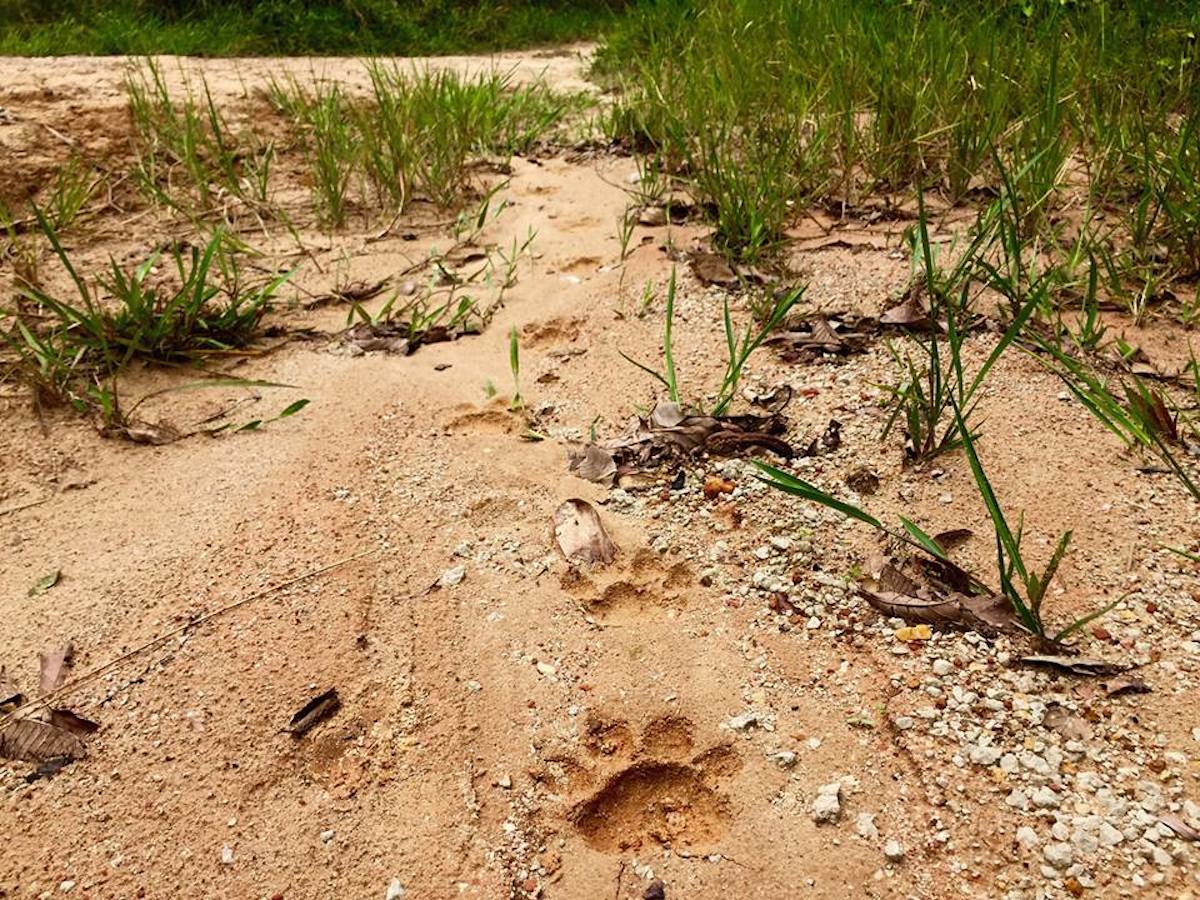 But it’s not only an important spot for jaguars; the Serranía is home to a plethora of bird species, as well as populations of spectacled bears and at least five species of monkey.

Relatively few studies have been able to penetrate San Lucas over the years. A study conducted between 1999 and 2001 by the bird conservation organization ProAves found more than 360 species of bird, 11 of them listed as Endangered. They dubbed San Lucas the “least known and most interesting area in the Western Hemisphere.”

Paul Salaman, CEO of the Rainforest Trust and one of the founders of ProAves, led three expeditions to San Lucas in the late 1990s and early 2000s and is certain that undiscovered species lie in wait within its high elevation cloud forest. He saw his wild first jaguar in San Lucas, but believes the real gems that must be conserved are the plants, the birds and the amphibians in the reaches of the mountain range. That area, he says, “really is the treasure trove of biodiversity.”

Unfortunately, discoveries of gold deposits have earned San Lucas another lofty name, that of “the largest gold mine in Latin America,” and “the true El Dorado.” The area has already been affected by mining and in some places rivers have been “turned completely upside down” in the search for gold, according to one anonymous source.

Gold mining is the illegal trade of the moment in Colombia, and analyses indicate it is worth more than the lucrative cocaine industry. The government estimates the worth of the illicit gold trade to be as much as $2.5 billion, money that has led to a proliferation of illegal mines across the country. San Lucas one of the most affected regions in the country. 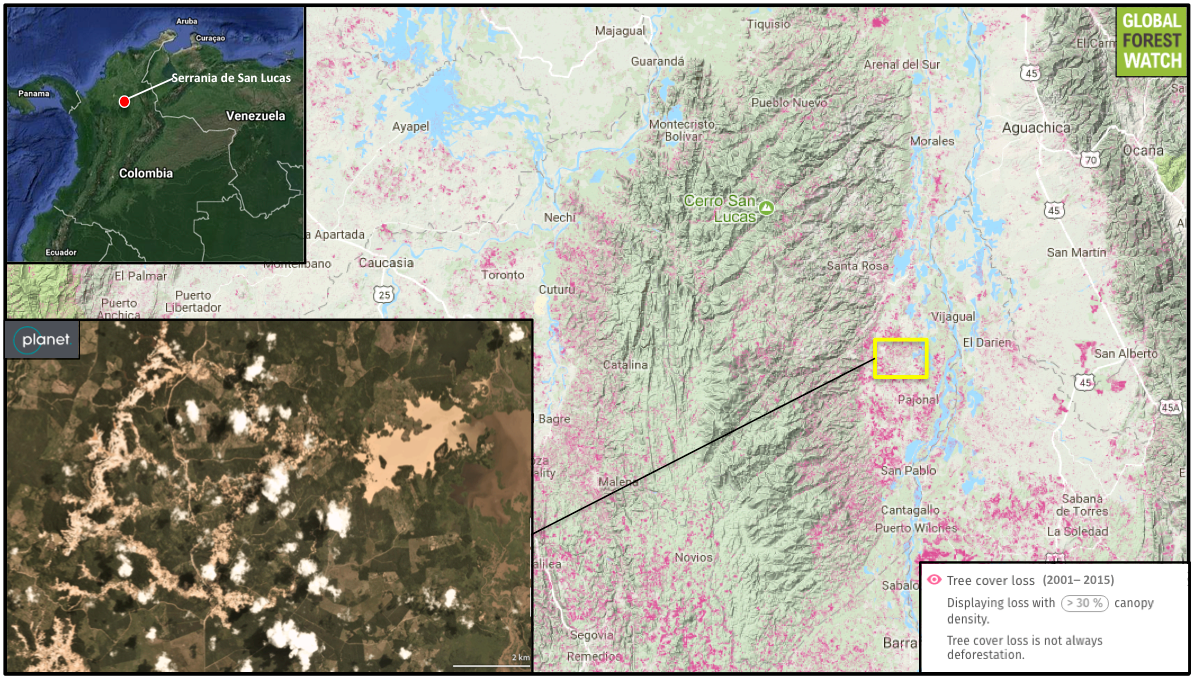 Data from the University of Maryland show heavy tree cover loss in and around the San Lucas mountain range between 2001 and 2015. Satellite imagery from Planet Labs captured August 2017 indicates mining activity is a major driver of deforestation in the region. Data: Hansen/UMD/Google/USGS/NASA, accessed through Global Forest Watch. 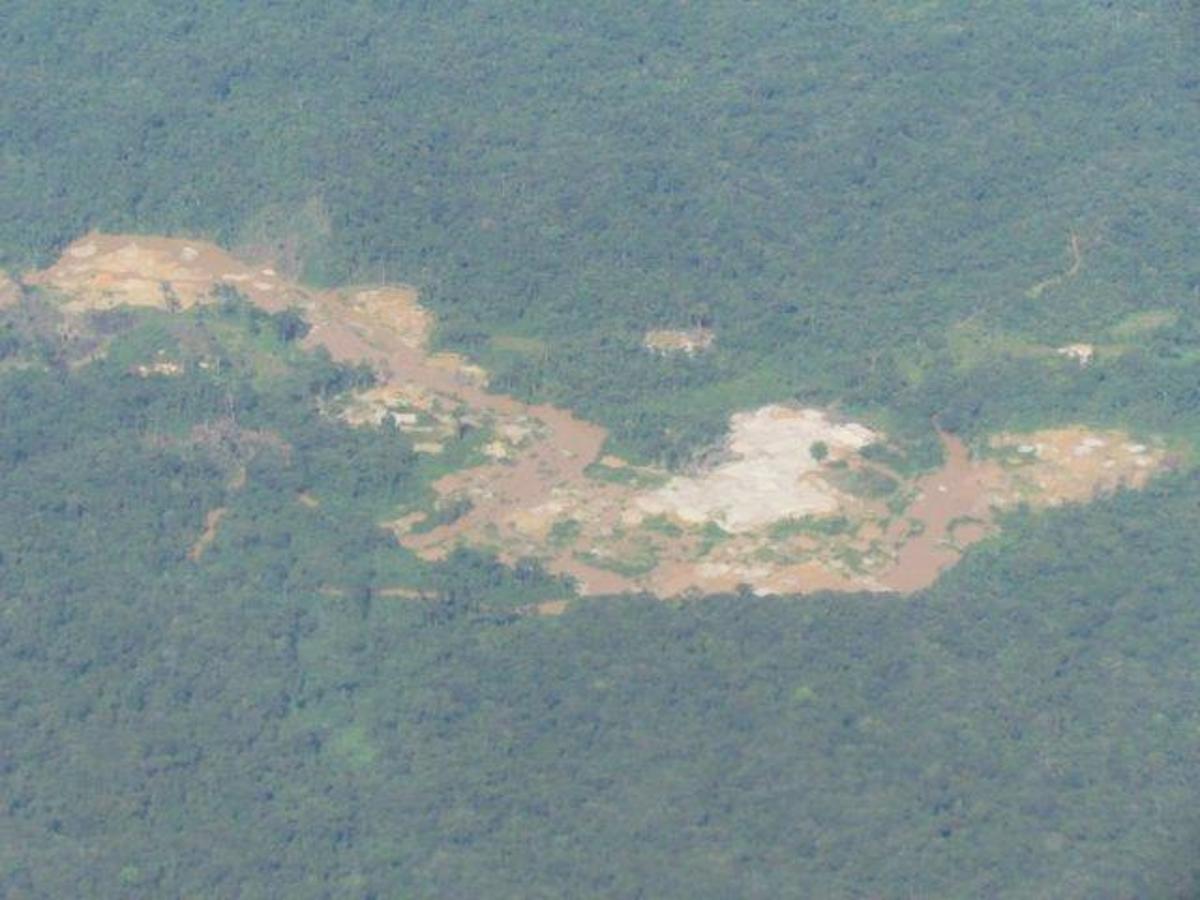 Last year, in a raid that shut down five illegal mines, four heavy diggers were confiscated alongside weapons such as AK-47s. The mines were run by Éjercito de Liberación Nacional, an insurgent group that has been fighting the Colombian government for over 50 years and maintains San Lucas as their stronghold.

But not all the miners are illegal nor is all the mining necessarily bad, says Gonzalez-Maya. Some of those in San Lucas are classed as traditional miners and carry out their livelihood as a means of survival. Estimates are uncertain, but sources say there as many as 30,000 miners working in the area, some illegally and others not.

Sections of Serranía de San Lucas have already been given over to legally operating mining companies , but development has been delayed until recently by a combination of instability and bans on new permits. A ban on further mining permits has been in place for two years and was recently extended for a further year, stopping any legal large-scale developments. However, this hasn’t had stopped the illegal practice. Many mines continue to operate without the proper licenses says Gonzalez-Maya, and others haven’t conducted environmental impact assessments to ensure they aren’t causing harm. One study from 2013 conducted by Colombia’s University of Rosario found that only three percent of mines in the country were working with environmental licenses.

As the FARC demobilizes and relative peace comes to Colombia, there are worries that previous no-go areas, like the inner reaches of the San Lucas forest, could become a free-for-all for unconstrained development. Gonzalez-Maya warns that last year saw Colombia’s highest deforestation rate in 20 years, most of it occurring in lands that were previously held by insurgents.

Poison in the water

Mercury is commonly used in illegal and small-scale mining as a quick and easy way to separate gold from other metals and sediment. But as much as nine-tenths of mercury used in mining escapes or is discarded into rivers where it then “biomagnifies” up the food chain as it’s ingested by aquatic wildlife. In 2012, a surprising study (available only in Spanish) published in Revista Latinoamericana de Conservación found two jaguar canines collected in Colombia’s Paramillo Natural Park possessed traceable amounts of mercury.

For Payan, such discoveries are only the “tip of the iceberg.” For him it’s not a case of feeling sorry for the “poor jaguar” that found itself ingesting mercury. Rather, he wondered “how on earth does a jaguar get mercury into its system?”

It’s not unusual for jaguars to eat a couple of turtles or caiman a month, species that can accumulate mercury and pass it up the food chain. But they don’t usually eat much more than this, so jaguars tend not to be exposed to high levels of mercury frequently enough to accumulate significant amounts in their tissue. While the amount the researchers detected in the tooth aren’t high enough to be toxic, their discovery suggests contamination may be more widespread in the ecosystem than previously thought. 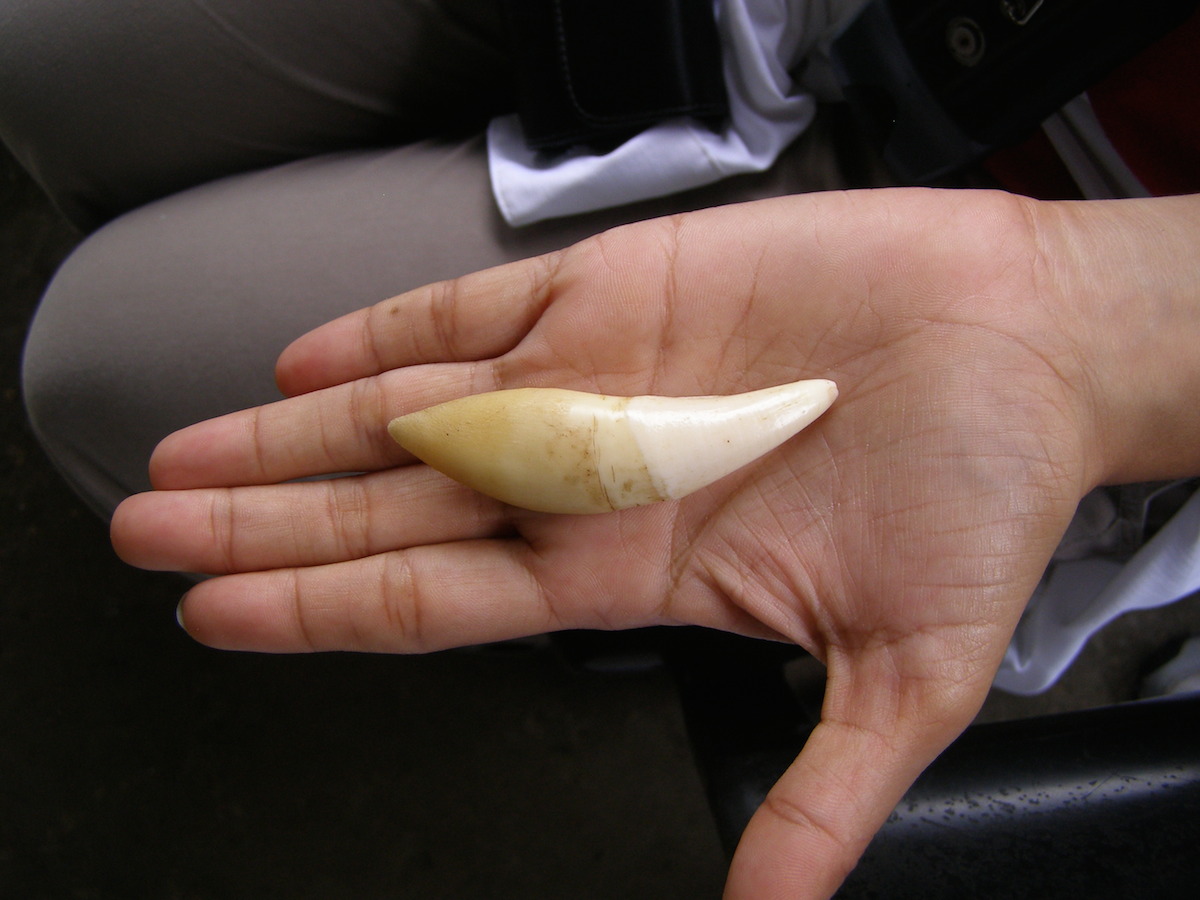 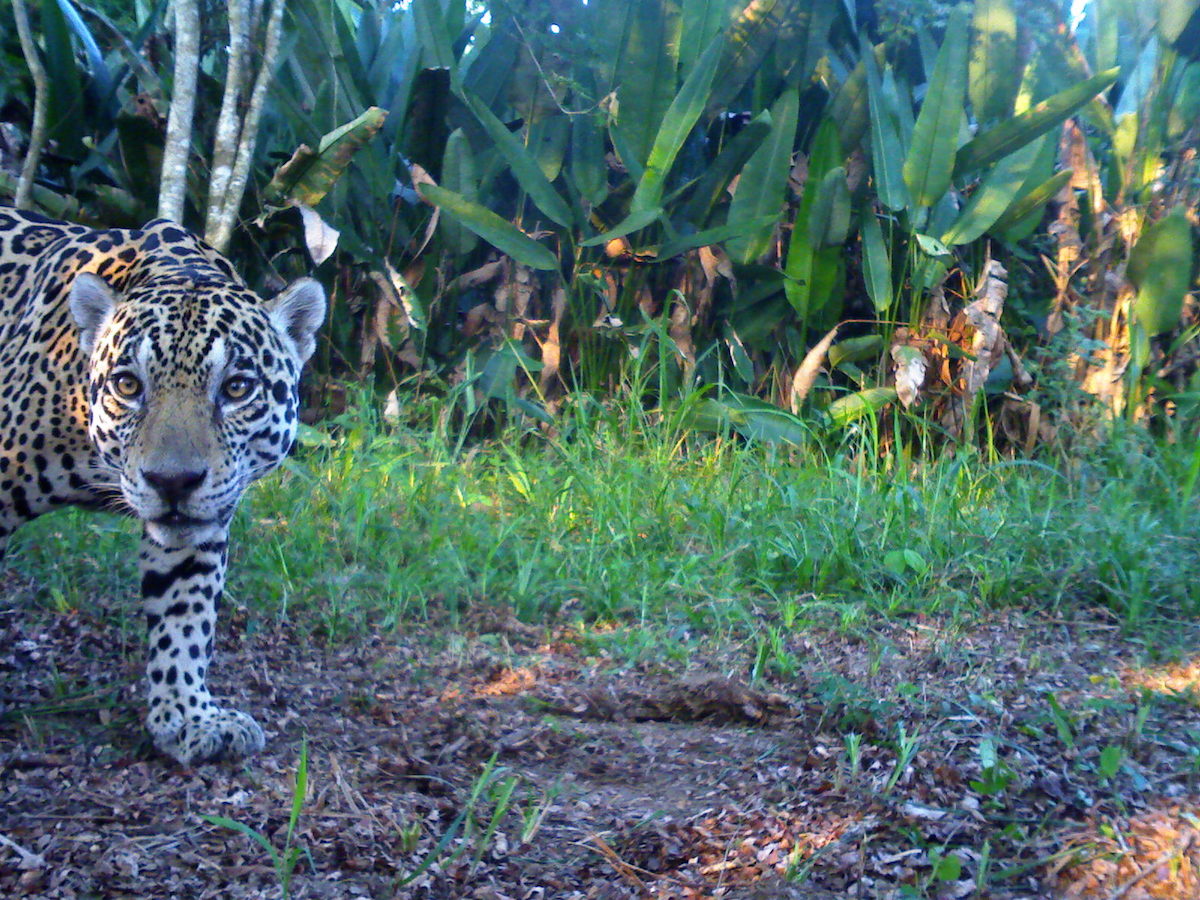 A jaguar is captured via camera trap. Photo courtesy of Panthera.

Elevated levels of mercury have also been found in humans who live in communities downstream from mining sites.

“Imagine what the people have… humans eat fish every day there,” Payan said.

Mercury contamination isn’t the only problem illegal mining has introduced to both people and wildlife. An influx of workers has brought with it other illegal activities like sex trafficking and poaching. Salaman says that species like the Magdalena tapir has largely been wiped out in the area.

Diseases like malaria and leishmaniasis also appear to be on the increase. In the first two months of this year, there were 27 cases of malaria and 8 of leishmaniasisreported in mining areas around San Lucas. Mining has been linked to an increase in malaria because the activity creates stagnant pools of water that are perfect nurseries for the mosquitoes that transmit the disease.

The rush to establish a park

The fight to protect San Lucas by turning it into a national park has been a seven-year battle waged largely by a group of NGOs and Nacional Parques Colombia, and Payan hopes that the process will be completed within a year. But this is far from assured. San Lucas’s situation became more perilous in July of this year when the Colombian government announced budget cuts for 2018 that could slash the Nacional Parques budget by 30 percent according to El Espectador. Minister of Environment Luis Gilberto Murillo reportedly told Colombian outlets there are other sources of funding, but Payan and his colleagues are still worried about the project.

“It’s the most important park that we should create for the jaguar,” he explained. He said he sees the park as an opportunity not only to ensure the species’ protection but also to empower local people and give them a sense of ownership over the land. People who live in the area are coming around to the benefits of protecting “their territory,” Payan said. 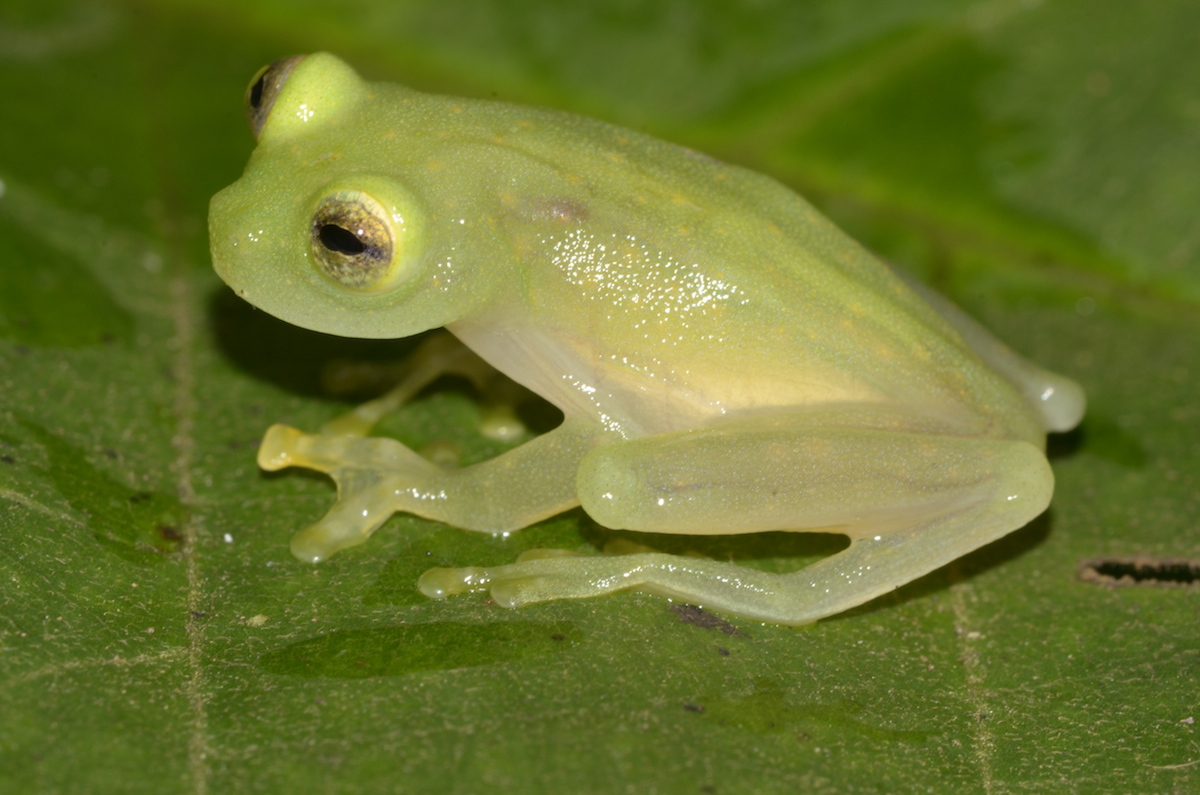 San Lucas is home to many species of animals of plants, such as this glass frog, and scientists think many others may lie in wait of discovery. Photo by Juan Manuel Rengifo.

Gonzalez-Maya agrees and says that creating a protected area within a larger “conservation mosaic” would allow the best of both worlds: preservation of one of Colombia’s most important biological areas while allowing local people to continue to earn a living. It would work by protecting a core central area, principally the higher parts of San Lucas, but also some of the lower lands, which have seen the bulk of development thus far.

Proponents of a national park say that, ideally, mining, farming and other practices would continue, but in a way that is much more managed to reduce environmental impact. Drinking water would be cleaned up and mercury-free for communities and, importantly for the jaguar and whatever undiscovered species may be out there, a protected and undisturbed chunk of forest would remain.

They concede that there is a long road ahead, one that must be traversed as quickly as possible if important San Lucas habitat is to be saved in time. But those who are fighting for protection remain confident that enough of the area’s forests can be protected to ensure a future for the jaguar corridor and the human communities that depend on it.

“It’s hard, it’s a race,” said Payan, but he remains optimistic. “It is really inspiring to see that there’s still a realistic, but also romantic notion, that we can maintain connectivity along the historical range of jaguars.

“As long as we keep on having strategies that affect large-scale landscape protection, we have a chance of conserving it.”