Seychelles Home to New Species of Caecilian, a Legless Amphibian

Seychelles Home to New Species of Caecilian, a Legless Amphibian

A team of scientists from Seychelles, the United States and the United Kingdom has found a new caecilian, perhaps the smallest species of the legless amphibian on Earth.

“As soon as I saw it I knew it was a new species,” Simon Maddock, a conservation biologist at the University of Wolverhampton, said in a statement. “[It] is a very exciting discovery and I was delighted to be able to formally describe it and present it to the world.” Maddock and his colleagues discovered what they’re calling the Petite Praslin caecilian (Hypogeophis pti), named for the island of Praslin in the Seychelles where they found it in 2013 and 2014. They reported their findings Oct. 6 in the journal Zootaxa.

The species has a longer snout than other Seychellois caecilians. Caecilians also have two sensory organs on their heads not found in other amphibians called tentacles. The Petite Praslin caecilian’s tentacles are nearer to the animal’s eyes than its nostrils, differentiating it from a close relative. The new species also has fewer vertebrae than any caecilian known to science, and it’s short, topping out at 120 millimeters (4.72 inches) in length.

The archipelago in the Indian Ocean is home to six other species of caecilian, and scientists figure they’ve been evolving there independently, along with a family of frogs called Sooglossidae, for 64 million years. Still, that doesn’t mean the snake-like amphibians are easy to find.

“Caecilians are common in the Seychelles but they are not widely known to people because they live underground,” Maddock said. “This new species has not been encountered on other islands during hundreds of hours of dedicated caecilian surveys between 1976 and 2017.” 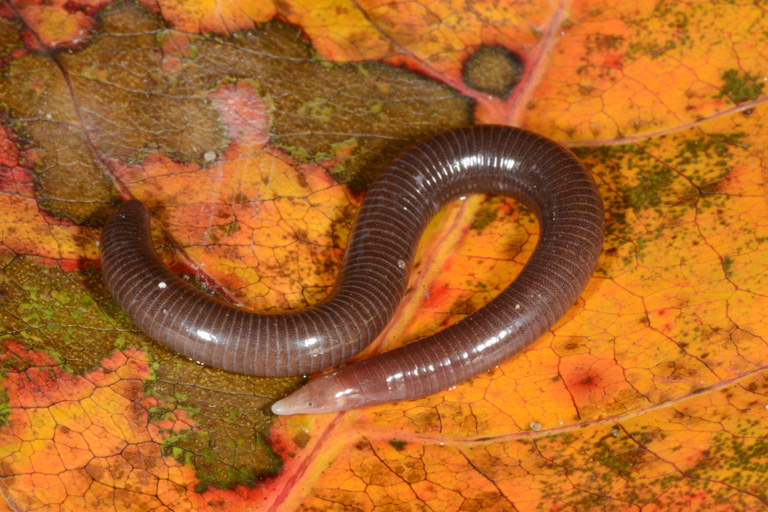 The petite Praslin caecilian (Hypogeophis pti) has only been found on the island of Praslin in the Seychelles. Photo courtesy of Simon Maddock / University of Wolverhampton.

That fact led the team to surmise that caecilians are endemic to Praslin, meaning they’re found nowhere else on the planet. Their tiny range also makes these caecilians particularly susceptible to the threat of extinction. Several recent amphibian die-offs in the Seychelles make the status of the Petite Praslin caecilian, as well that of other native amphibians, doubly concerning to scientists like Maddock.

In September, he was part of team trying to track down the causes of these threats to amphibian survival in the Seychelles. Around 30 percent of amphibians face the global specter of extinction, according to the IUCN, as habitat loss, invasive species and diseases have taken their toll. A disease-causing fungus called chytrid has been particularly devastating, but so far it hasn’t shown up in the islands. With amphibians in crisis nearly everywhere, Maddock emphasized the need for conservation in places that are rich in amphibian species.

“Considering the global importance of Seychelles’ amphibians, along with the recently observed mortality events, and the elevated threat posed by disease, an emergency response and effective strategy are required,” he said in a statement. “The extinction of any Seychelles amphibian would be a major loss to global biodiversity.”