Shamubeel Eaqub: Converting Our Values into Action on Climate Change

Shamubeel Eaqub: Converting Our Values into Action on Climate Change

The environment was a surprise highlight of election conversations.

Whether in the political debates or in personal conversations, the environment is an increasingly important issue.

This is a really optimistic place. What we need now is leadership and an apolitical approach for bold steps to tackle climate change. 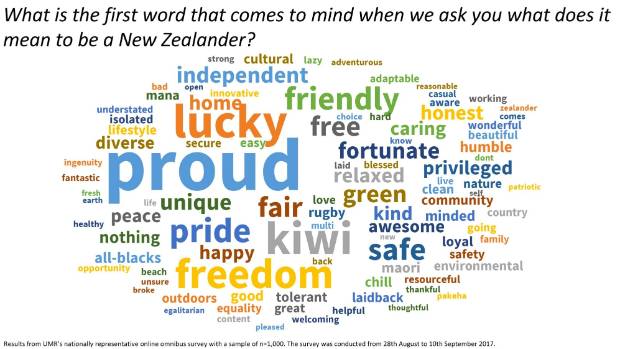 The words that people most associate with being a New Zealander, according to UMR.

In the lead-up to the general election, I asked myself what New Zealanders identified with.

What are our values? And are those values consistent with making big decisions to deal with climate change?

Shamubeel Eaqub: ” We do care about our natural world and it is an important pillar of being a New Zealander.”

I wondered: “What is the first word that comes to mind when we ask you what does it mean to be a New Zealander?”

UMR ran this question on its online omnibus survey, which is nationally representative with a sample of 1,000 respondents. The survey was conducted from August 28 to September 10 this year.

The results surprised me. We are proud and feel lucky to live in this nation that is free and caring.

Mixed in there was a good sprinkling of references to our natural environment.

It turns out we do care about our natural world and it is an important pillar of being a New Zealander.

Our concern for the natural environment and the importance of fairness are key ingredients in tackling climate change.

The governor of the Bank of England, Mark Carney, said: “…Climate change will be felt beyond the traditional horizons of most actors – imposing a cost on future generations that the current generation has no direct incentive to fix.”

He is describing a market failure – the costs and benefits fall on different groups of people – and we do not value future gains for other people as highly as the cost of changing our ways now.

Future generations will bear the consequences of climate change.

Our greenhouse emissions have risen since the 1990s, with a pause during the last recession.

Signing up to the agreements in Kyoto and Paris are not enough.

Left to our own devices, we will not take significant action. We have make a collective decision to act that is wide-ranging, set in law, and with strong and independent oversight.

I am a big fan of Generation Zero’s “Zero Carbon Act,” based on the UK Climate Act of 2008, which proposes holding the Government to account for promises made.

The Act sets out the pathway to their target. It’s a goal with a strategy. And it was done with cross party support.

Nine other countries and some US states have developed similar legislation.

The UK has made significant gains in recent years by making relatively easy changes, like coal to gas-fired power plants, which are much cleaner.

Future gains will be harder, but they have good policy settings and oversight to keep on this improving path.

New Zealand can also embark on this path, as the Parliamentary Commissioner for the Environment, Dr Jan Wright, outlined in her final report in that capacity.

She recommended that we adapt the UK Climate Act to our purpose.

For the incoming and future governments, the approach recommended by Dr Wright is the right one.

We need to adopt a legally binding target that is fair on future generations, develop and adopt budgets to lay out a pathway to get there, and support policies to achieve these budgets. Along with a strong, independent and transparent body for oversight and monitoring.

Our values are consistent with dealing with climate change. We are ready to do this.

But left to our own devices, we will not break out of the status quo.

We are so close, all we need now is for politicians to take the politics out of climate change.

Thousands Protest Across Australia Against Adani’s Coal Mine Project