Storm Harvey: Up to 2,000 Rescued as Houston Hit by ‘Catastrophic Floods’

Storm Harvey: Up to 2,000 Rescued as Houston Hit by ‘Catastrophic Floods’

Up to 2,000 people have been rescued from floods in and around Houston, as Tropical Storm Harvey continues to batter Texas with heavy rains.

There are reports of possible deaths in submerged vehicles, but investigations continue, Chief Darryl Coleman of the Harris County Sheriff’s Office said.

Texas Governor Greg Abbott told the media he could not confirm storm-related deaths.

It said there was a “flash flood emergency” across the Houston Metro area, with travel near impossible.

Many shelters have been opened, including in a convention centre.

Governor Abbott said about 250 roads and motorways had been closed in Texas and that he had made a federal disaster declaration for 19 counties that was granted by President Donald Trump.

“We are dealing with a triangle of ongoing rain, including Houston, Victoria and Corpus Christi cities,” Mr Abbott said. 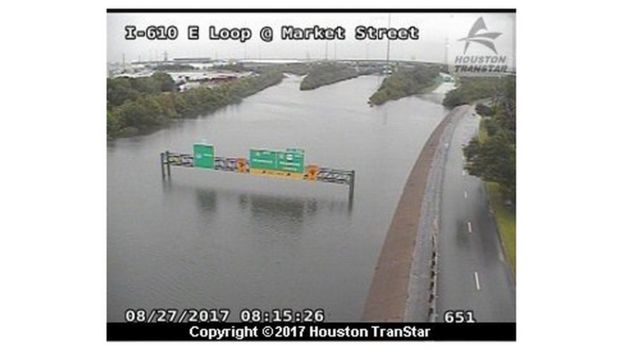 The NWS earlier noted reports of five deaths in the area, but only one fatality in Houston has been confirmed.

Two deaths have so far been confirmed from the storm since it made landfall:

Houston Mayor Sylvester Turner has urged residents not to call emergency services unless their situation is life-threatening and they need to be rescued.

“Don’t get on the road. Don’t assume this storm is over,” he said.

Officials in Harris County, of which Houston is the county seat, have asked people who own boats to help with rescues.

Houston Bush Airport has announced that all commercial flight operations have been stopped until further notice. Houston’s other airport, Hobby, is also shut, with runways completely flooded.

In Washington, the White House said that President Trump would visit Texas on Tuesday to survey storm damage. Mr Trump had earlier said that he would go as soon as it was possible to do so “without causing disruption”. 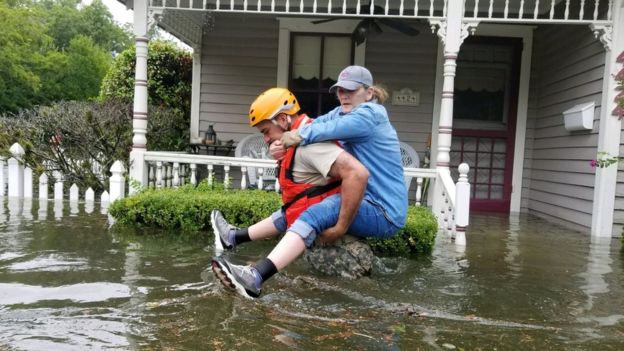 Roads have turned into rivers

Inside Houston a disaster is unfolding. The motorways are deserted except for fire engines, police cars and other emergency vehicles.

Moving around the city is extremely difficult and dangerous. And yet some people are still driving, adding to the pressure on city authorities

Everywhere you look cars are being abandoned as people scramble to find high ground. Roads have turned to rivers along which evacuees are being taken to safety in boats and in army-style, open-back lorries. 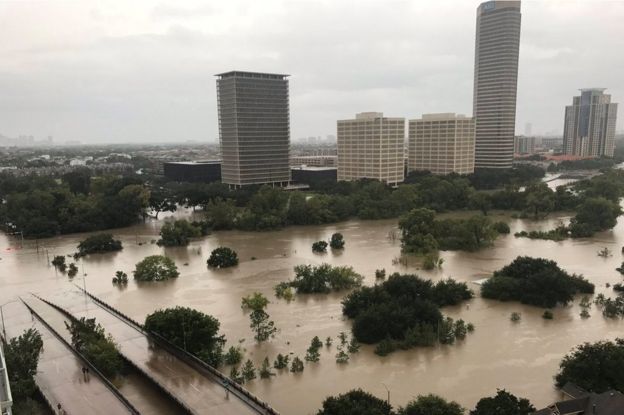 They are huddled together under blankets and towels, glad to be alive. And still the rain comes teeming down, bouncing off the ground and bursting out of drains.

Houston is facing a crisis on an unprecedented scale.

Flooding in the Houston area is expected to worsen and “could become historic”, with “potentially significant flooding also expected in other saturated areas of south-east [Texas]”, the forecaster says.

Like Houston, the island city of Galveston was also hit by “epic catastrophic flooding” overnight, the NWS added.

An inundated care home in Dickinson, Galveston County, is reported to have been evacuated by helicopter after an image of several elderly women sitting in a lounge in waist-deep water went viral on social media.

Rescue efforts are being hampered by strong winds and thousands are without power. The US Coast Guard in Houston has requested more helicopters as more people ask for help.

Mr Abbott earlier said another 40in of rain could be due before the storm subsides midweek.

Houston is the country’s fourth biggest city, with 6.6m people living in the metropolitan area.

Meanwhile, Exxon Mobil has said it is shutting down the second-largest refinery in the country, at Baytown. The Texas Gulf Coast is a key centre of the US oil and gas industry. 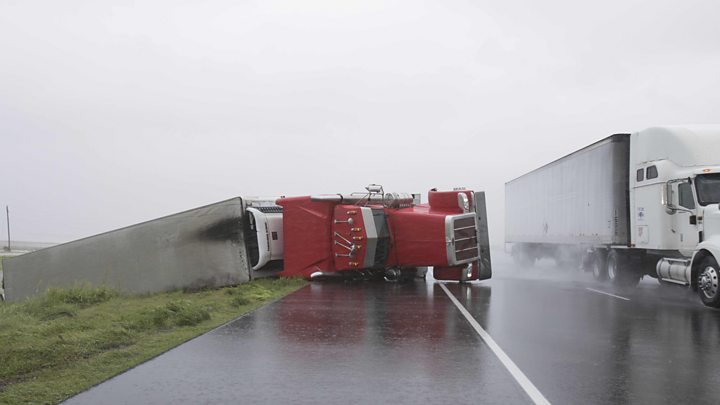 Harvey began as a major category four hurricane – the first to make landfall in the US in 13 years when it arrived late Friday – but was downgraded to a tropical storm later on Saturday.

It is forecast to meander across south-east Texas until Wednesday.

The storm is the strongest to hit the US since Charley in August 2004 and the most powerful to hit Texas since Hurricane Carla in 1961, which killed 34 people, according to the Houston Chronicle.