Tigers once roamed widely throughout Asia, from Turkey to the east coast of Russia and down to Vietnam. But a variety of threats, including human-wildlife conflict, the over-hunting of tiger prey species by humans, and especially poaching for the illegal trade of tiger skins, bones, and meat, has left vast areas of otherwise suitable tiger habitat unoccupied today.

According to Babu Ram Lamichhane, a wildlife research officer with Nepalese non-profit National Trust for Nature Conservation and lead author of a study published this month in the journal Oryx, Nepal’s Parsa National Park (known as Parsa Wildlife Reserve until June of this year) was one of those areas where tigers no longer roamed despite the terrain having the potential to harbor the species.

That appears to be changing, however: Lamichhane led a team of researchers who documented a threefold increase in Parsa’s tiger population in just three years.

Parsa attracted “very little attention from conservation organizations before 2009,” Lamichhane told Mongabay. “It was believed to be the sink of the neighboring tiger source population of Chitwan National Park. We wanted to highlight the potential of Parsa for tiger recovery.”

After 2009, conservation measures aimed at rehabilitating the park’s tiger population were undertaken, including village relocations, enhanced security (such as additional guard posts), the formation of community-based anti-poaching units, and other community engagement efforts. Not only did Lamichhane and team want to document the effectiveness of these measures, they also wanted to determine whether or not tigers are using Parsa merely as a refuge or as their territory, meaning they intend to stay a while and breed. 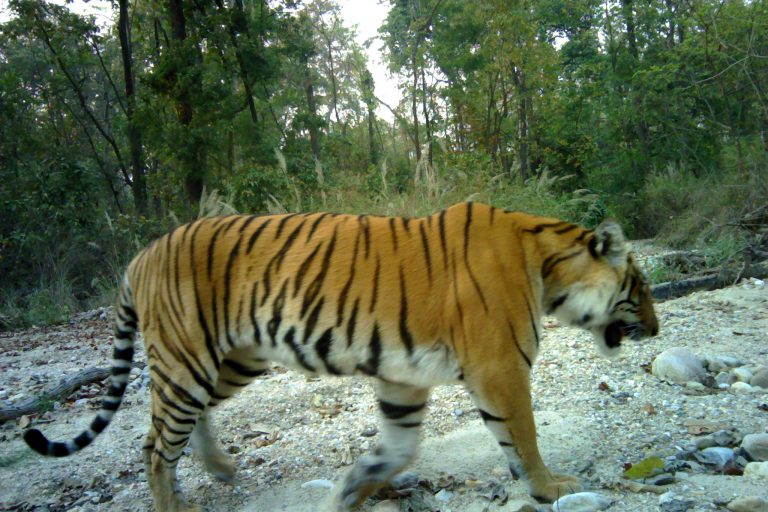 Tigers (Panthera tigris) are listed as Endangered on the IUCN Red List of Threatened Species, which reports that the total number of tigers in the world has decreased by more than 50 percent since the late 90’s, with breeding tiger populations now known to occur in just eight countries: Bangladesh, Bhutan, India, Indonesia, Malaysia, Nepal, Thailand, and Russia.

Research released last month determined that the tiger’s global range, like that of many other large carnivores, has been greatly reduced compared to its historical territory. In the tiger’s case, its total range has shrunk by as much as 95 percent.

According to the authors of the Oryx study, the remaining tiger habitat “is not occupied at optimum density because of poaching of tigers, hunting of their prey species and conflict with local communities.”

Parsa National Park is a key landscape for the species’ recovery. Nepal’s tigers are found only in five protected areas and surrounding forests in what’s known as the Terai Arc Landscape, which lies in the south of the country and straddles the border with India. Parsa National Park, the easternmost protected area of the Terai Arc Landscape, shares a 35-kilometer-long border with Chitwan National Park and is less than two kilometers from the eastern edge of Valmiki Tiger Reserve. 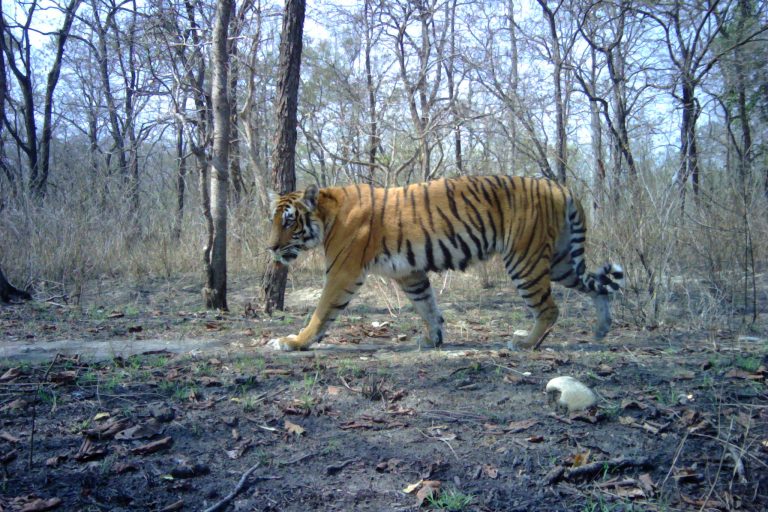 Lamichhane and his co-authors note in the study that the Chitwan–Parsa–Valmiki forest complex of the Terai Arc Landscape is of “global importance” for the recovery of tigers. Yet as recently as 2013, the tiger density in Parsa was just 0.78 tigers per 100 square kilometers, compared to Chitwan’s 3.84 tigers per 100 square kilometers. “Prey density had also been low in Parsa (5.5 prey individuals per km2) compared to Chitwan (62.6 per km2) as a result of widespread hunting and habitat degradation through livestock grazing,” the researchers write in the study, “leading to Parsa being considered the sink to Chitwan’s source.”

In 2010, Nepal made a commitment to double the size of its tiger population by 2022, and Parsa was targeted with conservation interventions in order to meet that goal. Lamichhane and team deployed camera traps in 2013, 2014, and 2016 in order to study the tiger population in the park. The researchers identified individual tigers based on their stripe patterns and employed a capture-recapture analysis to estimate Parsa’s tiger population density increased from 0.78 to 1.38 individuals per 100 square kilometers between 2013 and 2016.

Just five tigers were detected in Parsa by the 2013 camera trap survey. One year earlier, a tiger had been killed in retaliation for its attacks on livestock and people in a village that was still in the core of the park. That village has since been relocated, and the tiger population appears to be recovering quickly, with a total of 17 tigers detected in Parsa by camera traps in 2016.

The researchers determined that immigration of tigers from Chitwan has driven the rapid tiger recovery in Parsa, and that the tigers are not simply using Parsa as a refuge. “We documented that 40% of the tigers photographed in camera trap were dispersed from Chitwan,” Lamichhane said. “Tigers are not using Parsa only as dispersal refuge but they are also establishing their territory and breeding.”

While tigers had been known to disperse from Chitwin to Parsa in the past, he added, they could not persist long in Parsa “due to high anthropocentric pressure.” But with villages in the park evacuated, increased security measures, and local communities engaged in conservation efforts, tigers have started recolonizing the national park.

Lamichhane suggested that, despite the study’s focus on Nepal and Parsa National Park, the team’s findings might be more broadly applicable. “Tigers are conservation-dependent species and they respond to the conservation efforts immediately,” he said. “Our study illustrated that rapid tiger recovery can occur given the appropriate conditions of controlled poaching, inviolate space, and connectivity to a source population.”