The committee was integral in crafting how the U.S. responds to the greatest threat of our time.

President Donald Trump’s administration has dissolved a federal panel of scientists and other experts tasked with helping create and implement new policy based on the latest climate change research findings.

That decision, members of the 15-person committee told HuffPost on Sunday, does not bode well for the future of climate change preparation and prevention during Trump’s time in office.

A spokeswoman for the National Oceanic and Atmospheric Administration, which established the panel in 2015, confirmed Sunday that the Department of Commerce would not renew the charter for the Sustained National Climate Assessment’s Federal Advisory Committee.

“Per the terms of the charter, the [committee] expired on August 20, 2017,” the emailed statement read. ”The Department of Commerce and NOAA appreciate the efforts of the Committee and offer sincere thanks to each of the Committee members for their service.”

This is incredibly unfortunate for our country, and particularly the most vulnerable populations across the U.S.Maxine Burkett, University of Hawaii law professor

The National Climate Assessment (NCA), which has been published three times since the passage of a 1990 law mandating its publication, includes findings gathered by scientists from multiple federal agencies and has shown the devastating impact of human activity on rising global temperatures and related natural disasters in the U.S.

NOAA did not return inquiries into the possibility of the charter’s renewal but said the disbandment would “not impact the completion of the Fourth National Climate Assessment, which remains a key priority.” It’s scheduled for release next year.

The committee ― a panel of scientists, local government employees, corporate representatives and experts in related fields ― was tasked with decoding the findings from the climate assessment and developing guidelines for climate change-related endeavors, such as risk management and assessment efforts, economic policies, technology development and communication practices.

Members of the committee denounced the decision not to renew the committee’s charter and its wider implications. 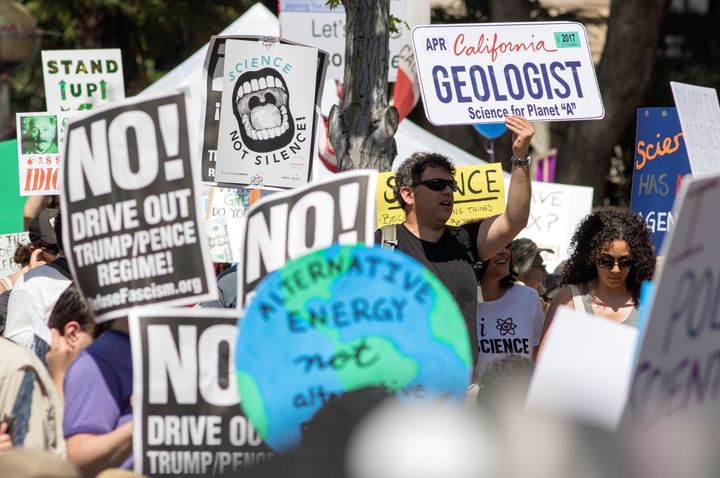 Marchers listen to speakers in Pershing Square during the March for Science in Los Angeles, California April 22, 2017.

“This is incredibly unfortunate for our country, and particularly the most vulnerable populations across the U.S.,” Maxine Burkett, a law professor at the University of Hawaii serving on the committee, wrote.

“Allowing our charter to lapse ends the process of providing recommendations on how to better support and strengthen our communities,” she said. The NAACP’s Environmental and Climate Justice Program, she pointed to as an example, had been sharing the committee’s information with “those at the crosshairs of sea-level rise, flooding, and extreme heat” ― all disasters linked to rising global temperatures.

“The work of our committee would have brought us closer to smart climate decisions on the ground and, with an equity lens, supported our communities to remain resilient together,” Burkett said.

Jessica Whitehead, the coastal communities hazards adaptation specialist for the North Carolina Sea Grant and another member of the committee, said she received confirmation of the committee’s expiration on Friday. The panel, she lamented, wasn’t given enough time time to carry out the work with which it had been tasked.

″[G]iven that our first meeting was in September 2016 and we received our charge to craft these recommendations from NOAA just in March 2017, we needed a renewed charter to give us enough time to really refine those concepts into actionable steps for NOAA and [the U.S. Global Change Research Program] to improve the NCA process,” she said.

The shutting down of the Sustained National Assessment Federal Advisory Committee will lessen our ability to manage climate risk, with the big losers being the American people.

Letting charters expire is a kind of “action by inaction,” committee member Jerry Melillo, a scientist and director emeritus at the Marine Biological Laboratory’s Ecosystems Center, said. And he’s worried that may be a pattern emerging in the Trump administration. Earlier this summer, he noted, the Department of the Interior let the charter for a similar Obama-era panel, the Advisory Committee on Climate Change and Natural Resource Science, expire.

“The shutting down of the Sustained National Assessment Federal Advisory Committee will lessen our ability to manage climate risk, with the big losers being the American people,” Melillo warned.

The last NCA report, released in 2014, made those implications for U.S. residents clear, and many of the threats it predicted ― more triple-digit temperatures, increased precipitation catastrophes and the failing of dated infrastructure ― have already begun to emerge.

Burkett, for one, hopes the work of committee may continue in an unofficial capacity.

“The decision not to renew the charter seriously jeopardizes the potential for the NCA to serve our communities,” she said. “But committee members are undeterred ― and I suspect there will be more from us in our individual capacities.”