The construction of a 3km canal in Indonesia has led Greenpeace and WWF to suspend its partnership with one of Indonesia’s biggest pulp and paper companies.

Riau Andalan Pulp and Paper (RAPP), a subsidiary of Asia Pacific Resources International Limited (April), dug the canal through thick peat forest on the island of Padang, just off the east coast of Sumatra.

In doing so, April not only flouted its own sustainability standards but went against government regulations and a letter of instruction issued by the Ministry of Environment and Forestry last year asking companies to block existing canals.

Drainage canals dry out peatland, releasing carbon emissions and creating the conditions for forest fires. Before last year, companies used to dig canals through deep peat forests in Sumatra with impunity, transforming once wild landscapes into monoculture acacia and palm plantations for the paper, pulp and palm oil industries. Both palm and acacia require good drainage.

But then came the catastrophic fires of 2015 that spread a toxic, yellow haze across Indonesia and its neighbours. The fires burned up 2.6m hectares and cost the country $16.1bn (£12.8bn) [pdf], according to the World Bank. A recent study calculated the pollution from the fires may have led to 100,000 early deaths.

In October 2015, President Joko Widodo called for blocking all canals as a way to restore degraded, fire-prone landscapes by lifting water tables, making it harder for fire to start and stay ignited. 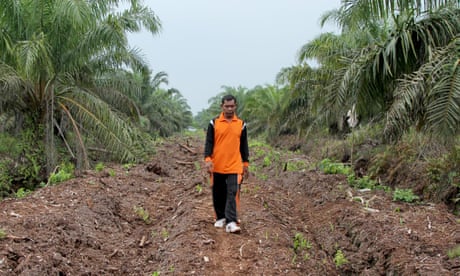 April insists the construction of the canal this year was due to a misunderstanding of government regulations. In minutes of a Stakeholder Advisory Committee (SAC) meeting posted for about half an hour on the April website, the company said it misinterpreted a government decree and “mistakenly concluded this canal was mandated by government regulations”.

Indeed, a report [pdf] published in August by April’s Independent Peat Expert Working Group (IPEWG) suggests canals could be used to combat fires, which is in fact the exact opposite of the government’s regulations.

“[April] wanted to create the impression that canal construction was seen as part of these regulations, whereas the regulations actually refer to canal blocking,” says Andy Tait, senior campaign adviser at Greenpeace.

Tony Wenas, the president and director of RAPP, has insisted building the canal and planting acacia in the cleared peatlands was legal because the plan had been approved by the Indonesian government back in 2013.

But that approval was given before the fires, the government’s new decrees, and April’s tougher sustainability commitment. Wenas also said the new canal was built as a fire break and not for drying out the peatland.

Yet the minutes of the SAC meeting said the company “made mistakes” in constructing the canal. “April has apologised to all parties concerned and is preparing a full explanation,” reads the minutes.

In response to the construction of the canal and deforestation in the region, the government gave April a verbal censure but has not taken any further action.

The incident – and rising mistrust – has led Greenpeace and WWF [pdf] to suspend their work on April’s SAC. Both groups say they can no longer work with a company they feel is not being forthright. Tait says Greenpeace has been concerned for some time about April’s limited follow up on key parts of its sustainability policy.

Owned by Royal Golden Eagle, April has long been a target of environmental groups for forest destruction and conflict with locals. Its concession on the island of Pedang has proven one of the most controversial due to opposition by the majority of villages in the area.

The company is also known for its obfuscation. In 2013 then-external affairs director David Goodwin asked Guardian journalist John Vidal to “pause” filming when asked very basic questions about April’s operations, such as how many trees were cut down over the last year.

“We’re not involved in deforestation,” Goodwin said, despite the fact that the company had been cutting down natural rainforest and planting monoculture plantations for over a decade.

After years of targeted campaigns, the company appeared to have a change of heart in 2015. It strengthened its sustainability policy enough to bring on board longstanding critics Greenpeace and WWF.
The new policy included no new clearing of forests on peatlands and an investment of $100m over 10 years for peatland restoration and conversation.

But, within months, the company fell foul of environmental groups after it was caught clearing the forest on Pedang, the same concession where it would be caught with a giant canal several months later.

“April needs to admit that draining peatland for pulp plantations is unsustainable and instead block its drainage canals and announce a major investment in plantation species that don’t require drainage,” says Tait.

April has yet to reply to the Guardian’s request for comment.