Brexit will not lead to a lowering of environmental standards in the UK, Prime Minister Theresa May has promised. The vow came as Mrs May unveiled the Government’s long-term plan for the environment, which sets out plans to “make ours the first generation to leave the natural environment in a better state that we found it”.

Rejecting as a “false choice” the suggestion that Britain must chose between economic growth or environmental protection, Mrs May staked her party’s claim for the green mantle.  She promised to put the natural world “centre stage” in her Government’s agenda and declared: “Conservatism and conservation are natural allies.” The plan comes as part of a concerted drive by Conservatives to demonstrate their concern for green issues.

Want to know about our #25YearEnvironmentPlan? Here's how it will eliminate all avoidable plastic waste within a quarter of a century to help make our country #plasticfree and leave our environment in a better state than we found it for the next generation. pic.twitter.com/OLVHod2ZOr

Their stance on issues such as fox hunting and the ivory trade was blamed for losing the votes of young people inspired with a renewed interest in the natural world by programmes like Sir David Attenborough’s Blue Planet II. 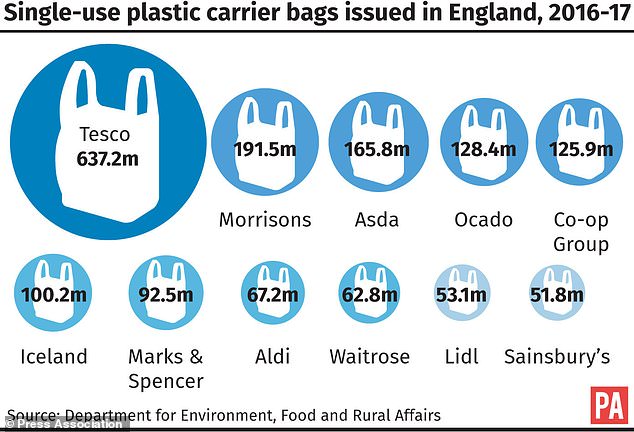 The environment scheme includes plans to:

Eliminate avoidable plastic waste within 25 years, including by encouraging supermarkets to introduce “plastic-free” aisles;Extend the 5p charge for plastic carrier bags to all retailers in England, closing the Government’s loophole excluding smaller shops;

Consider taxes and charges on single-use items such as takeaway containers;Direct aid spending towards helping developing nations reduce plastic use;

Support the transition to almost all cars and vans producing zero carbon emissions by 2050;Create a new Northern Forest stretching from Cheshire to Lancashire and Yorkshire;

Establish a £10 million Nature Friendly Schools programme to allow pupils to plant gardens, tend vegetable patches and set up bird feeders;Set up a world-leading independent statutory body to hold government to account on the environment after Britain leaves the European Union.

In 2015 we introduced the 5p charge on plastic carrier bags, we now see 9bn fewer bags being used. It's making a real difference. We want to do the same with single use plastics. Nobody who watched #BluePlanet2 will doubt the need for us to do something – and we will. #Marr

Opponents of Brexit have warned that EU environmental regulations could be scaled back after withdrawal, as ministers seek to drive up business competitiveness and build trade links with parts of the world with lower standards. But speaking at a nature reserve in south-west London, Mrs May insisted: “Brexit will not mean a lowering of environmental standards.

“We will set out our plans for a new, world-leading independent statutory body to hold government to account and give the environment a voice. And our work will be underpinned by a strong set of environmental principles.” Her Government will put the natural environment “centre stage” as a key priority and “will not hesitate” to intervene to ensure high standards, she promised.  The UK has already gone further than required by EU regulations to protect the environment, she said.

Meet Torin (12) and Riley (9 this Saturday). Every weekend they can be found on the beach picking up plastic pollution, whatever the weather! They are also one of the first to have signed up to #BigSpringBeachClean18. Great job guys! Photo @PhotoCheckered #powertothepupils pic.twitter.com/cgKeUtgeTL

Conservative-led governments have overseen improvements in air quality and progress towards decarbonisation since 2010, and have taken action to protect Britain’s coastal waters and ban harmful microbeads, Mrs May said. “It is sometimes suggested that a belief in a free market economy which pursues the objective of economic growth is not compatible with taking the action necessary to protect and enhance our natural environment, that we need to give up on the very idea of economic growth itself as the price we have to pay for sustainability,” she said.

Today @theresa_may will outline steps for a cleaner, greener Britain – and pledge to eliminate all avoidable plastic waste within a quarter of a century. #plasticfree pic.twitter.com/xMT7WZhIjr

“Others argue that taking any action to protect and improve our environment harms business and holds back growth. “Both are wrong. They present a false choice which I entirely reject… “The innovation and invention of a free enterprise economy will help to deliver new technology to drive a revolution in clean growth.” Mrs May said the new document represented “a national plan of action with international ambitions”.

Taken together with the Government’s industrial strategy, it provides “a coherent approach to boosting economic productivity, prosperity and growth, while at the same time restoring and enhancing our natural environment.” She paid tribute to Attenborough’s work in opening the eyes of millions of viewers to the threats faced by the natural world.

Britain’s natural assets were not only sources of food, but also a support for hundreds of thousands of jobs and are “good for our physical and mental health and our emotional and spiritual well-being”, she said. Mrs May described the problem of plastic waste, much of which ends up as damaging pollution in the seas, as “one of the great environmental scourges of our time”.

She said future generations would be “shocked at how today we allow so much plastic to be produced needlessly”. “Our goal is a healthy and beautiful natural environment which we can all enjoy, and which we can be proud to pass on to the next generation,” said Mrs May. “This plan is how we will achieve it.”