An enormous new airport outside Mexico’s capital will be a ‘global reference’ for sustainability, the government vows. Others worry environmental errors of the past are being repeated.

On the flat salt basin that was once the Aztecs’ great Lake Texcoco, Mexico is building its “door to the world” – an enormous airport the government vows will exist in harmony with the environment.  Officials described a terminal design so green that it would be a “global reference” for sustainability, and they pledged to rescue degraded lands surrounding the airport.

But soon after construction started in 2015, the government appeared to turn its back on part of that promise, ceding land designated on project maps for conservation to local officials for development.

And as construction moves ahead on Mexico’s grandest infrastructure project in decades, the much-heralded environmental protection effort is still so devoid of detail, critics say, that it raises questions of credibility and actually obscures the risk of flooding. 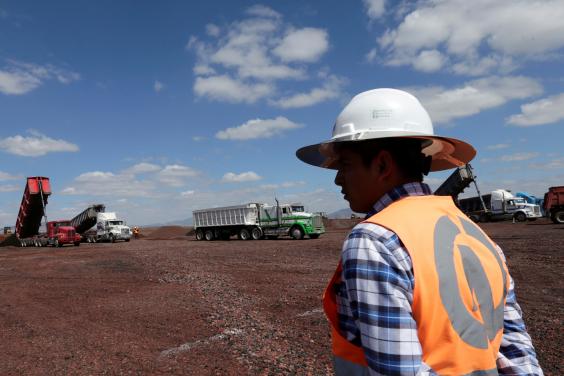 Centuries-old mistakes concerning land and water management are likely to be repeated as a result, said Fernando Córdova Tapia, an analyst at the National Autonomous University of Mexico who led a group of scientists that examined the government’s initial environmental impact statement. Handing over the land that had been earmarked for conservation, about 500 acres, was “the first symptom of how they are betraying the entire environmental mitigation effort”, said the analyst.

President Enrique Peña Nieto’s office defended the plans, saying in a statement that the project was “designed to improve the ecological health of the region and provide an integrated rescue of a zone that was environmentally degraded”.

The government’s plan calls for a network of channels, tunnels and five new reservoirs to collect runoff that drains into the area. Octavio Mayén Mena, a spokesman for the government agency managing the project, said reforestation is underway, and the National Water Commission said construction of the reservoirs will begin next year.

Still, the federal government has yet to present detailed environmental plans for the airport’s hotel and shopping areas, as well as for conservation and land use, on the approximately 27 square miles surrounding the new transportation hub.

The study by Fernando Córdova Tapia’s group warned that salt cedar, the main species in the reforesting effort, is not native to Mexico and is so invasive that it could damage the entire ecosystem.

The airport reflects President Peña Nieto’s aspirations of turning Mexico City into a travel hub for the Americas – and as he enters his final year in office it is also part of his effort to establish a legacy. The President, who is not eligible for re-election and is deeply unpopular, has been forced to cancel other big-ticket infrastructure projects over corruption scandals and budget cuts.

Evoking the monumentality of Mexican architecture, the British architect Norman Foster has designed a soaring steel and glass airport terminal, the heart of the $13bn (£9.78bn) first phase of the project, which is scheduled to open in 2020 and serve 50 million passengers a year. The new airport, which the government hopes will meet the highest international certification for green buildings, will relieve congestion at the capital’s Benito Juárez International Airport.

For more than two decades, successive governments have looked for a place to build the airport, and President Peña Nieto appeared determined to avoid conflict this time. Land struggles had scuttled an airport project to the northeast 15 years ago, and the lake bed – which is mostly federal land – seemed to offer an easier path.

But the site presents unique challenges. Lake Texcoco, where the Aztecs built their island capital, Tenochtitlán, once captured the rainwater hurtling down the surrounding hillsides. Eventually, the Aztecs expanded the ancient capital with landfill and planted crops on floating gardens called chinampas – plots of fertile arable soil on the shallow lake beds of the Valley of Mexico.

But Spanish conquerors drained the lake and cleared the forest, setting off centuries of flooding and water-management crises. With no natural source of water to filter back into the aquifer below, the lake bed itself is sinking.

“We inherited the war the Spanish waged against water and therefore the lack of wisdom on how to coexist with it in a sustainable manner,” said Fernando Córdova Tapia.

Last year, eager to head off any local opposition, the federal government transferred 500 acres wedged between two of the planned reservoirs to the city government of Chimalhuacán, which is controlled by a social movement called Antorcha Campesina, or Peasant Torch.

The local group has a symbiotic relationship with President Peña Nieto’s Institutional Revolutionary Party, delivering votes at election time and acting, often aggressively, as a ground operation for the party, said Neptalí Monterroso, a professor of political science at the Autonomous University of the State of Mexico.

The Chimalhuacán authorities wasted no time putting the land to use. A polytechnic university is rising, and football fields for a sports centre have been marked out. An industrial park is on the drawing boards.

“We’re talking about taking many people out of poverty,” said Cecilia Hernández Anaya, a spokeswoman for the Chimalhuacán government.

Mexico’s National Water Commission approved the transfer of the 500 acres. Though project maps show the land had been designated for habitat conservation and flood management, the commission, said that the area had never been included in the original flood control project.

The water commission’s former director called the land transfer “outrageous” and said the area had indeed been assigned to the reservoir system. “You can’t build anything there – there is a very high risk,” said the former director, José Luis Luege, a member of the opposition National Action Party.

Senator Víctor Hermosillo, also of the National Action Party, has asked for an investigation by the federal comptroller, noting that the land had been handed over with no impact studies. “That suggests a gift, a handout with a highly political electoral purpose,” he and four other senators said in a resolution in June.

Despite the land transfer, the politics of the poor towns surrounding the airport zone, especially Chimalhuacán, a city of low-slung concrete houses straddling the hillsides above the lake bed, are unpredictable. Ceding the land to the local government may have warded off conflict at one level, but it has not guaranteed peace.

Some 230 families who claim to be the original landowners of the plot that now belongs to Chimalhuacán and the reservoir sites on either side argue that they have been cheated out of just compensation.

Bearing copperplate land titles handed down over generations, they have staged protests, accosted politicians and sought out the news media. To buttress their claim, they unroll copies of maps dating to the 1930s that show named rows of narrow plots.

In May, the families reached agreement with the federal government for compensation, said Juan Loreto González, a leader of the group. But a deadline came and went, and the families have yet to see their money. They are threatening new protests.

“Chimalhuacán has always been seen as plunder,” said Cruz Hernández, who at 65 is old enough to have fished in the remnants of Lake Texcoco.

“The land has been stripped. Now we stand ready to fight.”

How Does Marijuana Farming Impact the Environment?